A joint operation by the law enforcement agencies in sixteen European countries and the US took down 410 underground websites. Tão longe, this is one of the biggest attacks against dark market websites on the Tor network.

The Tor network is an encrypted system that enables anonymous communication. It can be used in many ways legitimately, for example for avoiding monitoring in authoritarian countries. Problem is, the system can also be abused by cyber criminals.

The authorities have been targeting websites on the Tor network for quite some time now. After the successful Global Action against Dark Markets on Tor Network on Tuesday, the head of the Europol’s European cybercrime center stated, that criminals shouldn’t consider themselves above the law anymore. “The criminals can run but they cant hide.” 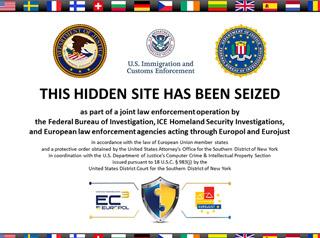 During the operation on Tuesday, 17 people were arrested. Among them was the suspected operator of Silk Road 2.0. The website is known for selling PC hacking tools, fake IDs and drugs. At that point, it was still unclear that these arrests were a part of a way larger operation.

NOS. Attorney P. Bharara revealed that after the takedown of the original Silk Road website, the authorities closed its replacement too, along with numerous dark market sites.

Ainda, law enforcement faces huge difficulties while trying to catch the crooks behind a Tor website. The system allows criminals to stay anonymous, and only small clues like an email address, por exemplo, can lead to the hacker’s identity.