2015 is over but it has left us with lots of questions to ponder over, especially in the aspect of malicious software and its consequences. Just by having a look at users’ infection rates, it becomes quite obvious that malware reached new, unbelievable peaks in 2015.

When we add numbers to such obviousness and get further from hypothetical speaking and closer to analysis, things suddenly take a turn on nightmare road. One of the latest analyses on the malware state in 2015 has been just released by PandaLabs, the laboratory of Panda Security. De acordo com a pesquisa, the numbers for 2015 are much scarier than the boldest of hypotheses – 27% of all malware cases have been registered in 2015.

PandaLabs have detected and neutralized more than 84 million new malware samples throughout 2015, ou 9 million more cases on top of what we witnessed in 2014. If we divide the numbers correspondingly, the result is 230 000 new malware samples created on a daily basis. 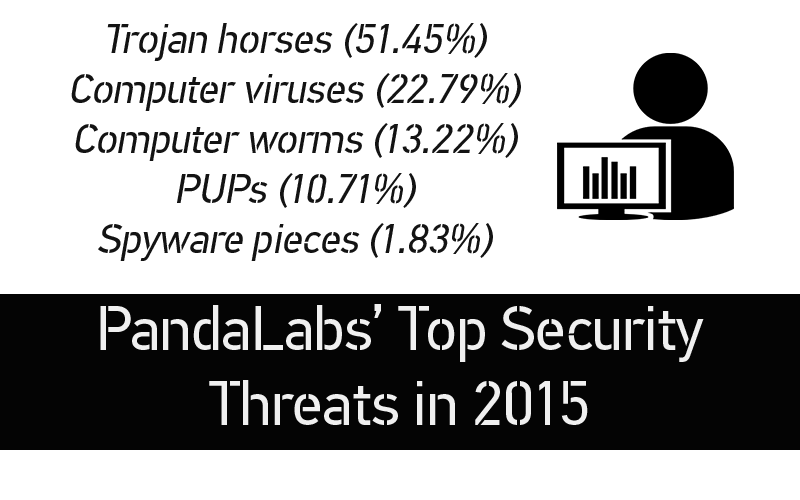 In terms of malware strains detected by Panda Security during 2015, we get the number 304 milhão, que significa 27.63% of the total number of malware families ever discovered and indexed by the security vendor.

All these numbers speak volumes not only about attacks on average users but also about the difficulties faced by multinational companies. Multiple data breaches and intelligence theft cases have occurred in 2015, and predictions for 2016 are not glowing either.

We predict that the amount of malware created by cybercriminals will continue to grow. We also can’t forget that the creation of millions of Trojans and other threats corresponds to the cybercriminals’ needs to infect as many users as possible in order to get more money.

Panda Labs’ Most Prevalent Threats in 2015

PandaLabs’ collected samples once more prove the effectiveness of potentially unwanted programs (PUPs) and Trojans that were massively used in attacks on large businesses. Trojan horses represent 51.45% of malware intrusions. Next on the list are:

According to their own data records, the CryptoLocker ransomware has been the main character in a prevalent number of cyberattacks that took place in the past year.

Countries Most Affected by Malware

China has suffered the most, having the highest rate of infections caused by malware. PandaLabs’ numbers are shocking – 57.24% of computer infections have taken place in China, qual é 30% mais que 2014. Next on the list of countries most affected by malware is Taiwan with 49.15%, and Turkey with 42.52%. The three countries were on the top infection charts in 2014 e 2013.