What Is Cryptomining (Cryptocurrency Mining)?

Home > What Is Cryptomining (Cryptocurrency Mining)?

What Is Cryptomining (Cryptocurrency Mining)?

Cryptomining, short for cryptocurrency mining, is the process of validating a cryptocurrency transaction. Bitcoin, for example, utilizes public ledgers to record all transactions, with each transaction being linked to the previous one. This creates a chain of time-stamped records, shortly known as a blockchain.

Since the distributed ledger is public, each record needs to be validated. Validation is needed to prevent fraudulent transactions, and the process requires complex mathematical computations, as it is difficult to solve. Nonetheless, verifying the transactions is still possible. 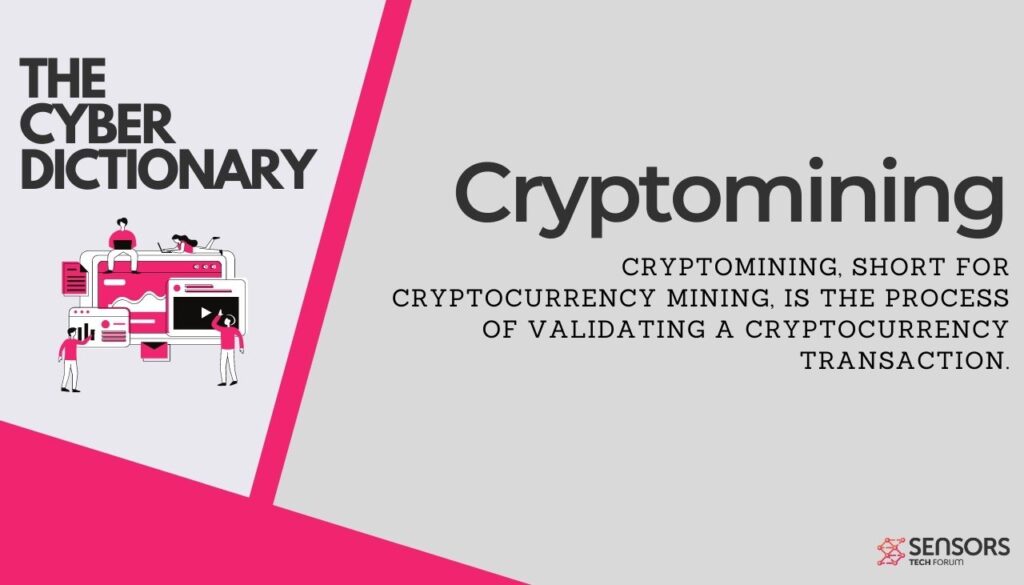 Cryptominers, or networks of computers, compete to solve the problem first, with each first miner (computer) earning the right to post the transaction to the ledger and getting a financial reward in cryptocurrency as a result.
Cryptomining requires high resources of hardware and energy, so to be competitive, the miner should have these resources. Miners can also be malicious, and the process is known as cryptojacking.

Miner Malware and Cryptojacking Definitions: Cryptomining malware (also known as coin miners and crypto miners) steal the resources of infected machines, significantly degrading their performance. If your computer is infected with a cryptominer, you will also suffer extreme power consumption. Cryptocurrency miners are usually stealth and farm these resources in a silent manner. Various devices can be affected, such as computers, smartphones and other electronic devices connected to the internet (smart, IoT devices). They all can be exploited to generate revenue for hackers.

As for cryptojacking, it is a form of cybercrime involving the unauthorized use of devices connected to the internet (computers, smartphones, smart devices, and in some cases, even servers). The process is done so that cybercriminals can mine for cryptocurrency and generate profit. Examples of cryptojacking operations involve the use of malware such as the so-called Bitcoin Miner virus and SilentXMRMiner.