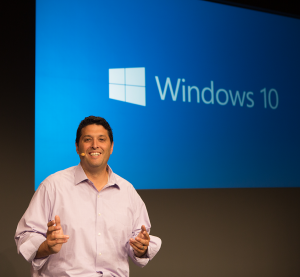 Windows 10 may have been much anticipated among the core followers of the operating system.

However, the events that took place after the official release of Win10 definitely triggered discontent. Events… or to be more precise – updates. The update policy that Microsoft embraced with the release of its latest product is, to say the least, a double-edged knife.

Just recently, the company had no choice but to admit that it was downloading Wind10 on every Windows 7 and Windows 8 machine. Thousands of forced download situations followed, initiated by changing an optional upgrade to Windows 10 as ‘default’, instead of ‘optional’. Read more here.

The ‘accident’ is probably nothing but a not-so-secret test run. Microsoft has just confirmed what many tech-savvy heads already began to fear – mass upgrades to Windows 10 from all Windows 7 and Windows 8 machines.

In a nutshell, everything that has happened so far seems to point at one direction. This place in the foreseen future has more than 110 million devices running Win10 (110 million being the number of the current existing machines that are upgraded to Windows latest). The corporation is getting more aggressive, and we can only guess what their plans are for 2016.

For starters, one of the corp’s first plans for next year is to re-categorize Windows 10 as ‘a recommended update’ in the Windows Update system. Once this happens, the Win10 upgrade process will be initiated automatically. Here’s what Terry Myerson, Microsoft’s head of Windows and Devices, says on the matter in an interview with The Verge:

This dialog box will only appear once to the user. Then, Win10 can be automatically downloaded to the PC, depending on the Windows Update particular settings. Users can choose not to receive nagware messages prompting them to upgrade. Also, Win 7 and 8 users with metered connections will have to turn off automatic updates to stop the Windows 10 download process. Mr. Myerson was reluctant to comment on the company’s plans after July 29th 2016, when the free upgrade for a year is over.

‘If you try and upgrade a non-genuine PC to Windows 10 today it says the free upgrade is only available to genuine PCs. We’re seeing people be creative to get around that block, and then many are actually going to the Windows Store and buying a genuine license.’

To make it easier for users to get a genuine copy (or to increase the number is Win10 users, one may think), Microsoft plans to run an experiment on the US market. The corp will offer a one-click chance for a license from the Windows Store, however, it won’t be free-of-charge. Windows ‘Pirates’ will have to buy the genuine license to get the upgrade.

The master plan? Installing Windows 10 approximately on 1 billion devices within the next couple of years.