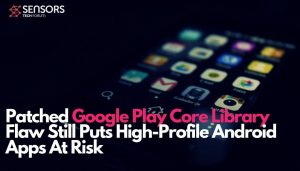 A severe vulnerability for the Google Play Core Library was reported in Late August.

Known as CVE-2020-8913, the flaw endangers many widely-used Android Apps such as Grindr, Cisco Teams, Microsoft Edge, Booking.com, Viber, OkCupid. New Check Point research reveals that many of these high-profile apps are still running the unpatched version of Google Play Core Library. The bug is rated 8.8 out of 10 in terms of severity and could be exploited to harvest sensitive data, including passwords, financial details, and emails.

According to the official description, the vulnerability could cause local arbitrary code execution due to issues in the SplitCompat.install endpoint in Android’s Play Core Library versions prior to 1.7.2.

Google patched the CVE-2020-8913 flaw on April 6, 2020. However, it seems that several high-profile Android apps are still using vulnerable versions of Android’s Play Core Library. Why is that? Since developers need to push the patch into their apps, it is entirely up to the developers when this happens. Unlike server-side flaws, when the patch is applied to the server, client-side flaws require each developer to take action separately. In the case of the CVE-2020-8913 patch, several vendors have ignored the patch.

What are the dangers stemming from an unpatched Google Play Core Library flaw?

“If a malicious application exploits this vulnerability, it can gain code execution inside popular applications and have the same access as the vulnerable application,” Trend Micro says.
Attack scenarios based on this exploit are unlimited, but here are some of the most probable ones:

The developers of the vulnerable apps should update and use the patched version of Google Play Core Library to protect their users.

Last month, we warned Android users of a new banking Trojan. Dubbed Ghimob, the malware can spy and harvest data from 153 Android applications in countries such as Brazil, Paraguay, Peru, Portugal, Germany, Angola, and Mozambique.