Meet KB3110329, yet another Windows update that failed to do its job, currently causing many headaches.

This security update resolves vulnerabilities in Microsoft Windows. The most severe of the vulnerabilities could allow remote code execution if an attacker is able to log on to a target system and run a specially crafted application.

KB3110329 was released on January 12 when the first 2016 Patch Tuesday was rolled out. As we have written already, this particular Patch Tuesday served to fix many security issues in Windows. KB3110329-related problem have appeared only on Windows 7. 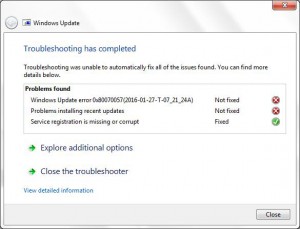 Apparently, the security update has failed to install on machines running Windows 7.

Even though the first problems were registered on January 18, no official fix for the failed installation has been outlined.

This is when a user, Neil and ArlyssNorris, has started a topic about KB3110329 on Microsoft Technet forums, saying that:

Shortly after his publication, other users have confirmed that the update is buggy. The Windows Update Troubleshooter is not of any help either.

Other solutions unsuccessfully tried by other users include:

So, what should Win7 users do, if none of the ‘classic’ solutions listed above seem to work?

The only thing to do for now is hide the update, take a deep breath and wait for an official statement by Microsoft. Keep in mind, however, that such a fix may not be released at all, which is a big shame. KB3110329 is a security update and as such, it should be treated accordingly.