How to Protect Your Android or iPhone from Unwanted Spam Messages 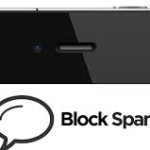 ‘Special Deal IPhone 6 HERE!‘ – says one of the iMessages on your phone. ‘Get your new laptop 70% off price!‘, states another.

If you’re using the iPhone or iPAD iMessage application, you have probably come across such messages, although for sure Android users have seen their fair share of spam SMS messages as well.
It seems that the iMessage, Android or just regular spam SMS messaging is on the rise at the moment, and its sources are almost impossible to track.
The good news is that the newest Android and iPhones are including better spam-blocking features in their systems already.

How to Protect Your iPhone

If you’re receiving spam messages on your iPhone, having IOS 7 or higher version installed will almost immediately fix your issue. The steps are actually quite simple – all you need is just adjusting your settings. Here’s a short guide how this happens:

Open the message, go to ‘Contacts‘ and press the small ‘i‘ button that appears. You will see the contact card you have received the message from (empty in most cases). Scroll to the end of that message and press ‘Block this caller‘. Voila – that works!
If you’d like to see all the numbers and users you have blocked, go to Settings -> Messages, scroll to the bottom part of the screen and select ‘Blocked‘ – the list will appear. If you wish to remove somebody from that list mark his number by scrolling from right to left and press the red ‘Unblock‘ button.
Blocking one spammer does not mean that all of them will be blocked by default, but is at least something.

How to Protect Your Android Device

Although by the iOS 7 release blocking spam SMS messages was impossible for iPhones we must say that it’s slightly easier than the settings in Android. You will not be able to block spam SMS messages with your default Android settings, but there are quite a lot of applications in Google Play Store, which will do that for you.
SMS Filter or Mr. Number, for example, let you create and manage a so-called ‘black list‘, i.e. a list with contacts or numbers that you don’t want to be bothered from. Other anti-spam applications like Postman and Spam Blocker are going even further by flagging suspected spam SMS messages.

Unfortunately all these applications could appear to be useless if you have already installed the new ‘Kit Kat‘ version of Android. It has a restriction allowing only one application at a time going through your messages.

To see if thit is the case for you go to your Android phone Settings -> Phone Info and check what is written in ‘Android Version‘. If the number is 4.3 or smaller, your phone is still not upgraded with Kit Kat. If the number is 4.4 or higher though, you will need a new default anti-spam application for sure.

Fortunately, there are many applications that will fit the newer version as well. You can try EvolveSMS, for example, an application that lets you create your own black list of numbers or SMS Blocker, which will automatically block any SMS spam messages.

Another alternative for you would be to install Google’s Hangouts application. It lets you send and receive your own SMS messages filtering spam as well that may be the ultimate case actually. Using it, you will have to set it to filter unwanted messages though. After downloading it from the Google Play Store, you need to select it for your phone to use by default. Go to your phone Settings menu, select ‘More‘ below the ‘Wireless & Networks‘ one, and go to ‘Default SMS app‘. This will lead you to a menu from which you can select which applications to use for managing your SMS messages. Select ‘Hangouts‘ and go back to the main screen of your phone. The application will automatically upload all your old SMS messages. The spam and suspicious ones will be rouge-coloured. Open one, go to the three-dot menu in the upper screen corner, select it and press the ‘People and options‘ button. You will see a ‘Block Number‘ selection, and voila – this number will not bother you anymore!
If you’d like to see all the numbers you have already blocked, go to the three-dot selection again, press ‘Settings‘, go to ‘SMS‘ and then to ‘Blocked Numbers‘. You can unblock a number from that menu if you change your mind as well.