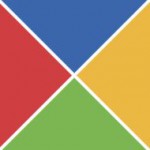 Ah if it isn’t one of the best programs for Windows – the Ultimate Tweaker. It has been created by Paras Sidhu and published on The Windows Club web page, and the little program is teeming with features. We have decided to review the latest version of the program which is meant to be used for Windows 10 mainly to see whether or not it is actually able to stop several “features” that are difficult to modify otherwise.

After we downloaded the archived file it had four objects in it, the read me file, link to the home page, the executable, and its .dll file. Amazingly enough, the program does not even require installation which means that if you carry around the executable (796 KB) and its .dll (43 KB) around in a portable drive, you may be able to tweak any PC at any time and place as long as it has a functional Windows 10 on it. The program also has versions 3 and 2 which are specifically designed for older Windows versions – 8.1, 8 or 7.

When the program started, the first detail we noticed was something very typical for Ultimate Windows Tweaker – the number of customization settings. Upon opening, it created a restore point in case the settings modified by the program are not to our liking, or something goes wrong out of nowhere.

In fact, we were so mesmerized by them, that we decided to count them. The program had seven areas to tweak with 14 tabs (or sub-menus) and a total of 272 tweaks to mess with according to our count.

Furthermore, the program was very light on the system’s resources as well:

Let’s begin reviewing the settings. The program dev has structured them as tabs on the left side, just like the newer menus of Windows. There are tabs for the advanced tweaks, and there are quick shortcuts for the tweaks which would be more used: 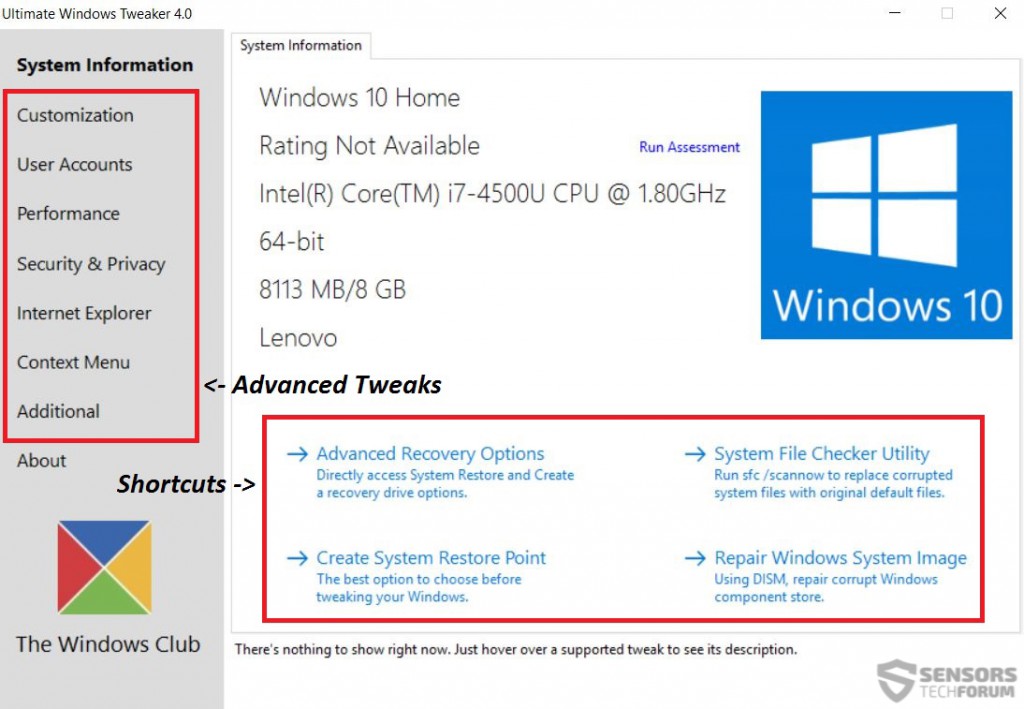 When you visit the customization tab, you will discover five sub menu tabs that allow you to modify your Windows’s Taskbar, File Explorer, Modern UI (User Interface), Windows 10, and This PC (new name of “My Computer”). The settings are so detailed that they even allow the user to change margins, sizes, and seconds to which several notifications appear. 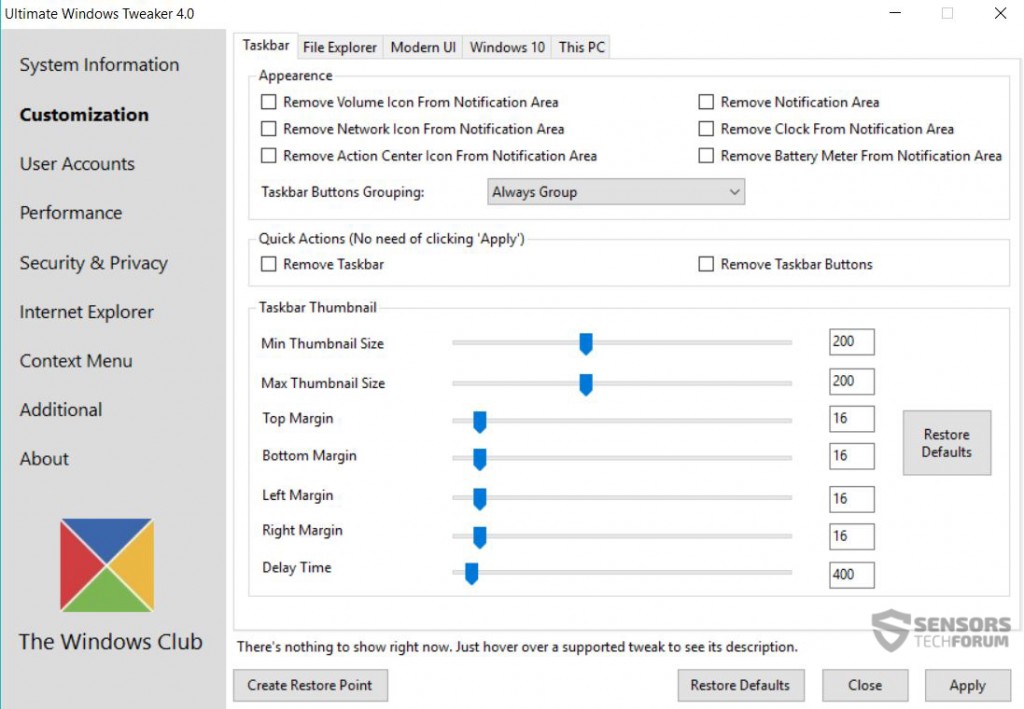 The User Accounts tab is there just for that – to modify settings for the Users on the computer. They allow the easy access to your regular settings to modify plus detailed modifications such as a custom login message on your screen and to disable the updates of Group Policies. 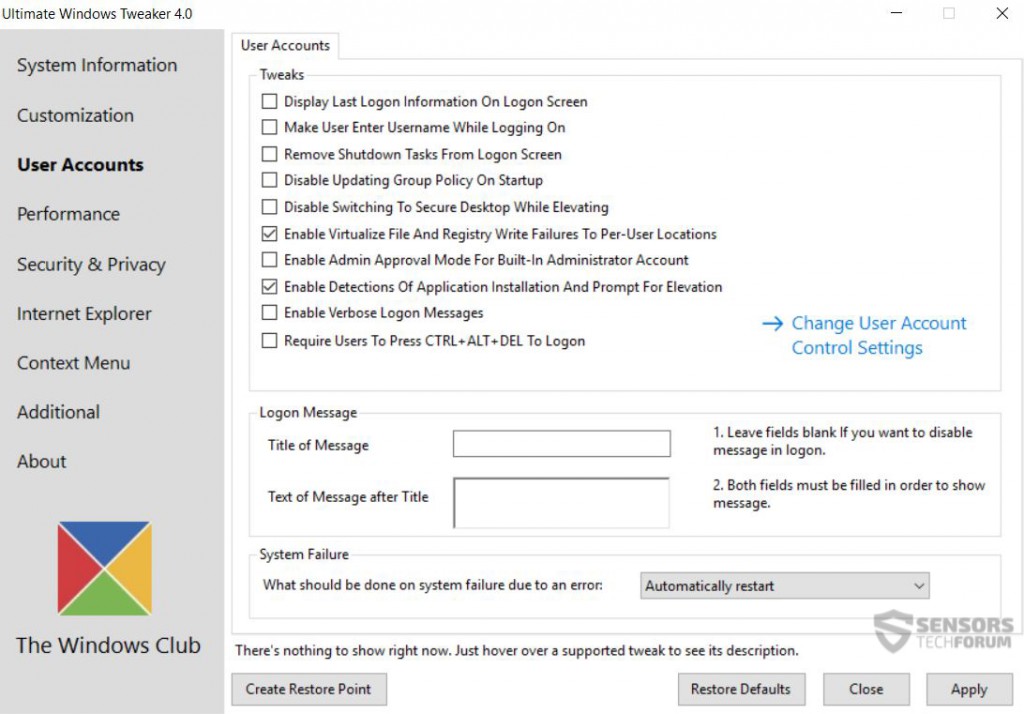 When you get in the Performance tab, it immediately becomes clear that the program allows you to make tailor-made configurations of different waiting times (applications, shut down, etc.). It also has other interesting tweaks, such as the Increasing priorities and disabling Windows Services like the spooler driver to increase performance. 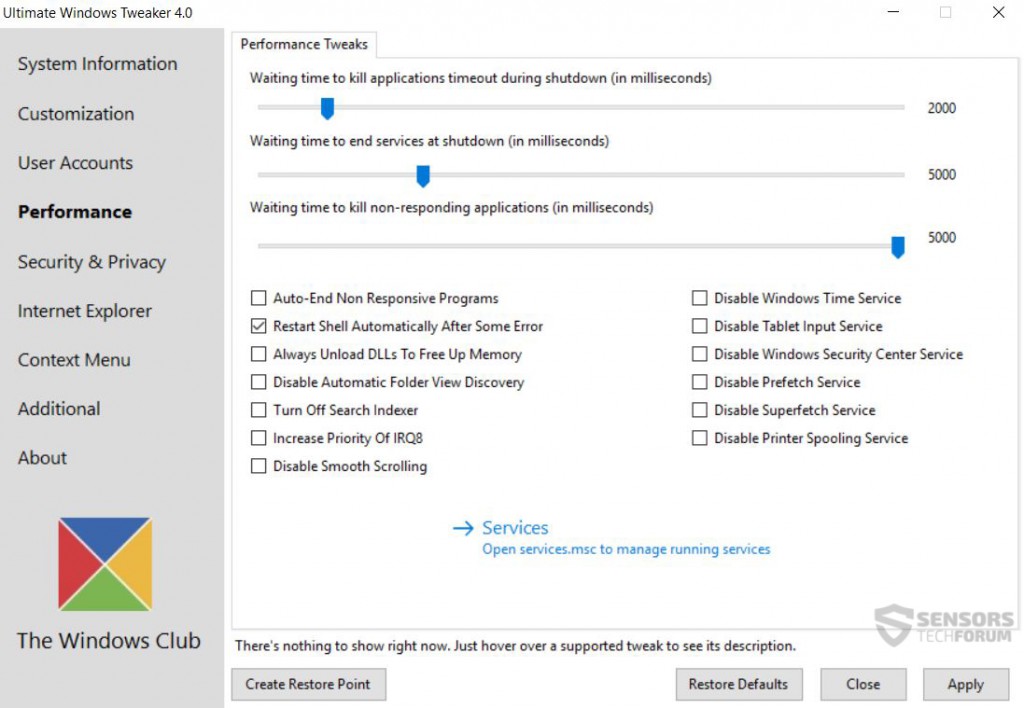 When it comes to the most discussed subject concerning Windows 10 – security and privacy, the program has separated a special tweak tab for it. When you enter, you immediately notice the ability to stop immediately the Windows Update Service. Besides that, there are a variety of services and tools that this neat little tool allows you to discontinue. It even stops The Auto Logon Shift Override Feature. All of the settings are very suitable if you want to restrict quickly an inexperienced user (child, for example) access to these features. Yes, they can be reverted, but the user has to know how to make a system restore or how to get in the settings and set them up. 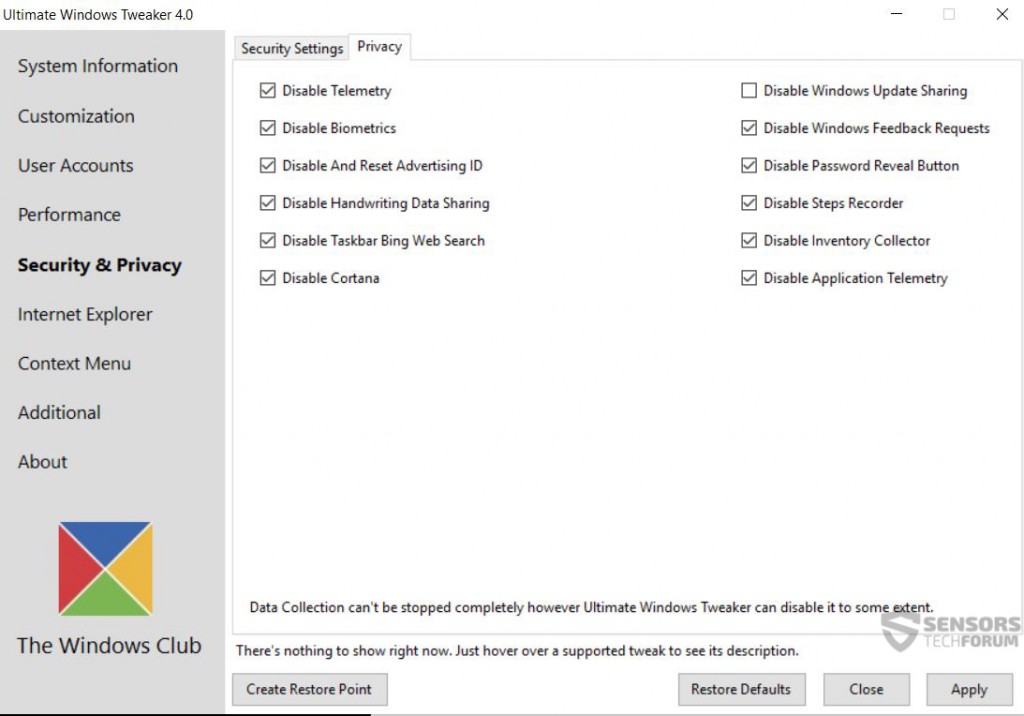 The Context menu settings are all made in the same manner, allowing the user to set the position of every item in the context menu. They even give the ability to tamper with the settings in the different drives in the computer. 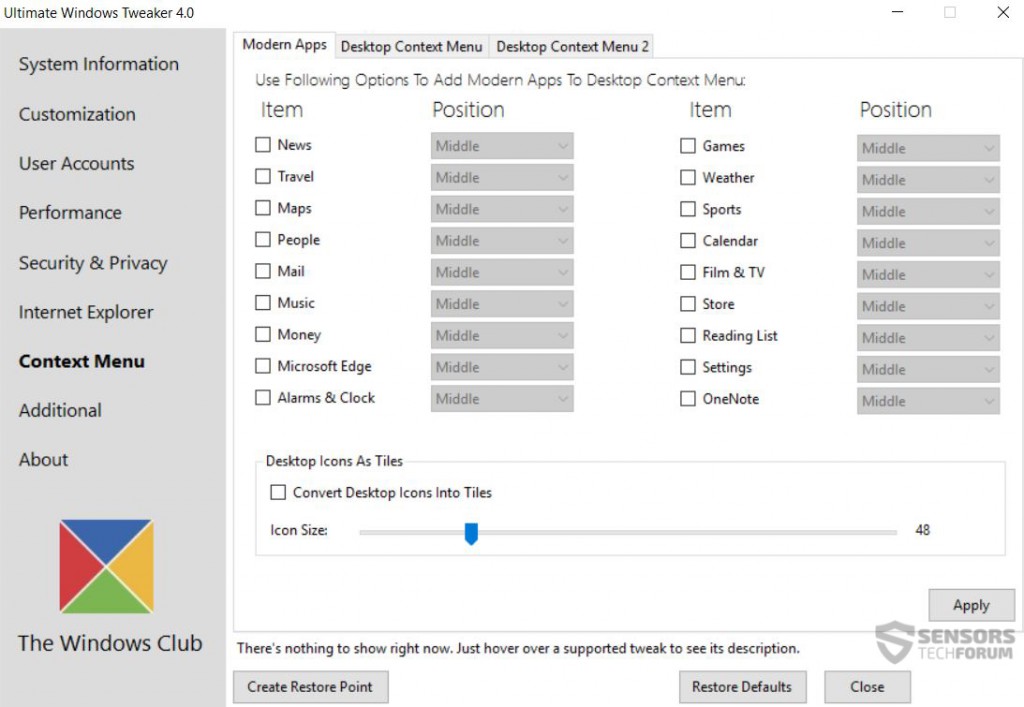 Last, we would like to mention the Additional settings. Not because they are of a big relevance, but because of the In-Depth customization they allow. It is so advanced that you can even modify the blinking of your cursor, disable or enable sharing, servers, connections as well as network processors and even turn off automatic settings such as auto app terminating. 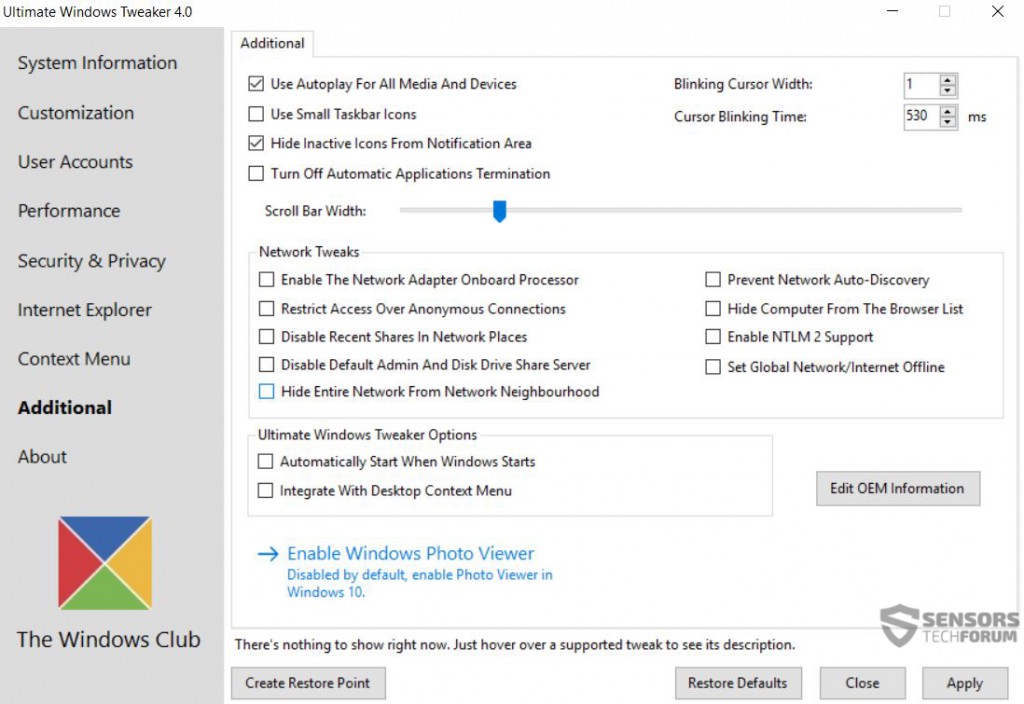 All of this is simply magnificent because it saves a lot of time because those settings are usually concealed in sub-sub menus of sub-menus of menus in Control Panel. This is why this program is perfect for inexperienced users but it is also suitable for PC technicians who have to tweak certain tailor-made settings on client demand.

However, here, it is a good idea to mention the dark side of this app. TBH, we expected it to perform well when it comes to the privacy tweaks, especially the ever-annoying “Cortana” process that is constantly running. We asked the app to stop Cortana and after pressing confirming the changes, the computer immediately began restarting. This was extremely irritating and frustrating because we had some work being done on this device and the program restarted it without any warning. And what was even more annoying was that Cortana’s process was still running, which was a bad sign. So yeah, do not expect a warning on restart and Cortana’s task manager process to be stopped by this app.

We enjoyed many features of this software, and the main of them were:

We have noticed that there could have been some aspects that could be added or improved:

As a bottom line, we recommend this program be always close by if you are using Windows, especially if you are an IT guy dealing with Windows machines for home users. It cannot be a substitute for the features Windows Server provides, but it can be used as a tool to modify a random PC swiftly according to a specific request. And the in-depth modifications never fail to disappoint with this program, so it is highly recommended.