It seems that Browser Stack, a famous cross-border testing tool, who has more than 25,000 customers all over the world, including eBay, Microsoft, Adobe, etc. has been hacked two days ago.They continue offering their services though.

One of the signs that something’s gone wrong was an e-mail sent out to Browser Stack users which was not actually sent by the company as they confirmed. The message states that Browser Stack will no longer continue offering their services as they were ‘negligent’ in their offering. The message cites several points of the company’s terms of service regarding the access to customers’ virtual machines. Later on, it admits their security and private access to be a lie and saying that all the users’ information is compromised. Here’s how exactly the message looked like: 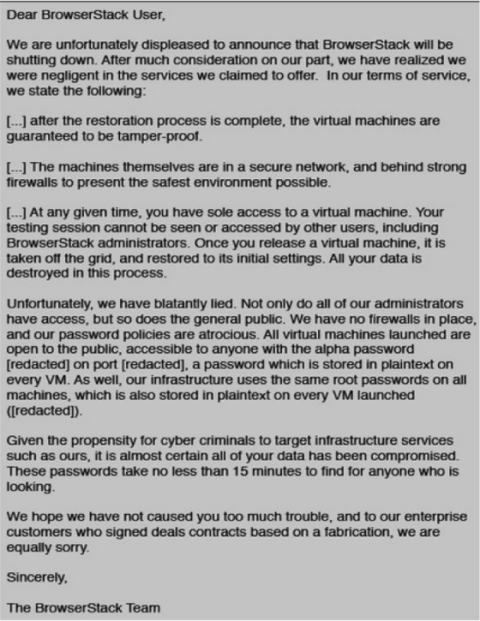 As said above Browser Stack confirmed to being hacked by first posting a message on their official Twitter account:

→’We did get hacked. Currently sanitising entire BrowserStack, so service will be down for a while. We’re on top of it & will keep you posted.’, the tweet says.

Later on they added an update that the hack attack was limited to only a specific list of users, the latest tweet being that the service is entirely up and running already.

According to Adithya Chadalawada, Senior Sales Associate at the company, the hack attack started by sending out messages to users on 9th November, 2014 at 23:30 GMT. He also added that they are in the process of removing the attack and making sure this does not happen again. He also advises users to change their Browser Stack passwords as a precaution to further threats.

Who sent out the messages is still unknown. Speculations say that it is possible a member of the company staff to be responsible for the fraud. Another theory is that an outside crook has managed to enter the company’s network, gaining access to company customers’ emails.