Hacker Attempted to Poison the Water Supply of Oldsmar, Florida 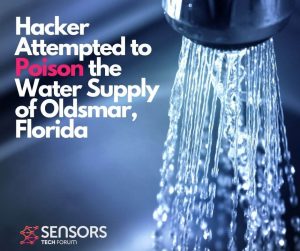 Cyberattacks can compromise the systems of crucial facilities, thus endangering the lives of people.

This is what happened in Florida, USA recently, when a malicious intruder remotely accessed the IT system of the water treatment facility. The incident took place in the town of Oldsmar. The hacker raised the levels of sodium hydroxide in the water. Fortunately, this was quickly noticed and remediated.

How did the attack against Oldsmar’s water treatment facility happen?

An undisclosed threat actor successfully hacked in the facility’s computer system with the intent to poison the town’s water supply. Fortunately, one of the plant’s operators noticed the intrusion. During the press conference Pinellas County Sheriff Bob Gualtieri said that at first the operator didn’t think much of the intrusion, because the remote access feature is often used by his supervisors.

Later that day, the operator noticed that someone again accessed the system remotely, moving the mouse around to access various systems essential to how the water is treated. The hacker also changed the sodium hydroxide’s level in the water from 100 parts per million to 11,100 parts. This is a potentially dangerous increase, the Sheriff added.

The Sheriff also notified the FBI and the U.S. Secret Service and cooperated with them to investigate the incident. You can watch the Sheriff’s statement for more details of the attempted attack.

Last year, hackers attacked a coronavirus test facility. The Hammersmith Medicines Research, a British company that previously carried out tests for Ebola vaccine, was attacked by the Maze ransomware gang. The facility had to postpone medical trials on any coronavirus vaccine.