Home > Cyber News > Is That an iPhone 6 Plus Bending in Your Pocket?
CYBER NEWS

Is That an iPhone 6 Plus Bending in Your Pocket? 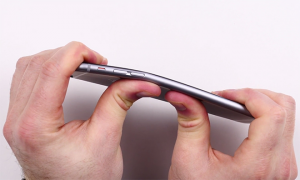 The owners of the new iPhone 6 Plus are already complaining about it. When wearing the new iPhone model in their trouser pockets, some owners were unpleasantly surprised that it bends.

A few days after the release of iPhone 6 Plus, Twitter users showed images of a bent. A popular youtube channel also decided to make a video where they put the strength of the new Apple 5.5in smartphone to the test. According to the released video, when considerable force is applied, the new iPhone 6 Plus is susceptible to bending near the volume and power buttons.

A lot of people taking part in the MacRumors website forum confirm that iPhone 6 Plus bends while being placed in the front pocket, which is the preferred way for many users to carry their phones. According to Mobile Bulgaria magazine, the striking fact here is that the complaining users of iPhone 6 Plus were not making any considerable movement– they were just sitting still for a certain period of time with the phone in their trouser pockets.

The new models iPhone 6 and iPhone 6 Plus are designed to come with larger screens than their predecessors and at the same time they are thinner. Most probably this makes wearing the devices in the front pocket much riskier.