Antivirus Pro 2017 is classified as a rogue antivirus program. Rogue applications are known to display fake virus messages so that the user is tricked into buying the full version of the program. However, if the full version of Antivirus Pro 2017 is downloaded, the system may be affected by various types of malware. Security rogue software is developed with the sole purpose to generate money and as such, is not to be trusted. Furthermore, it may block legitimate software and be very persistent in the attempts to be removed.

Download a System Scanner, to See If Your System Has Been Affected By Antivirus Pro 2017.

Antivirus Pro 2017 comes from the same family as Antivirus PRO 2015 and Defender Pro 2015. Once installed, the rogue AV will perform a fake system scan and will detect various issues on the system. Users should not be alarmed by anything alerted by Antivirus Pro 2017 since it is not a trustworthy program. 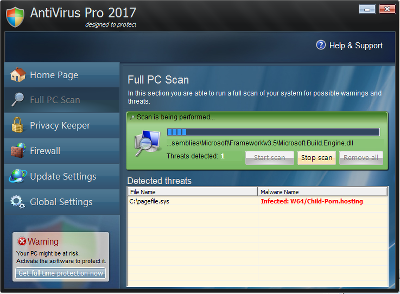 The longer the bogus application is running silently in the background, the more vulnerable the system becomes. The chance of remotely executed malicious attacks is also quite probable. Once the system is attacked, the user’s online accounts may be hijacked, resulting in money theft and various scams.

The rogue may have been included in the package of a free software product available online. Also, Antivirus Pro 2017 may have been downloaded willingly by the user. Rogue applications are often described as useful tools, and inexperienced users may easily be tricked into downloading them.

Other distribution methods include:

Keep in mind that rogue AV applications may be very persistent to remove manually because they may disable certain components of the system. Thus, uninstallation may be challenging for non-expert users. That is why running a valid anti-malware program to scan and detect all threats is the best option. Have a look at the steps provided below to deal with the issue and protect the PC.

1. Start Your PC in Safe Mode to Remove Antivirus Pro 2017