PC Mechanic 2015 is a rogue antivirus program that was created mainly to generate profit to its authors. PC Mechanic 2015 is known to create a start-up registry entry and modify the affected PC’s browser settings once it is active. PC Mechanic 2015 runs a fake system scan of the compromised machine and displays security alerts and pop-up warnings about various infections that the program has supposedly detected on the computer. To eliminate the reported threats, the victim is encouraged to buy the licensed version of the program. Experts warn that PC Mechanic 2015 does not possess any malware removal capabilities whatsoever, so purchasing the software will not ensure the safety of your PC. On the contrary, PC Mechanic 2015 is considered a security threat itself and should be removed as soon as possible.

Download a FREE System Scanner, to See If Your System Has Been Affected By PC Mechanic 2015.

How Is PC Mechanic 2015 Distributed?

The rogue program can end up on the compromised machine when the user downloads free software from unreliable websites or networks. Bundled with the initially desired software, PC Mechanic 2015 can be spotted and respectively not allowed to enter the system if the user selects the Custom options. PC Mechanic 2015 may also be distributed to the victim’s PC through Trojans.

Experts recommend that users choose their download sources cautiously and never open or download email attachments from unknown senders. Keeping their antivirus tools up-to-date and backing up their important files on a regular basis is crucial for the safety of their PCs. 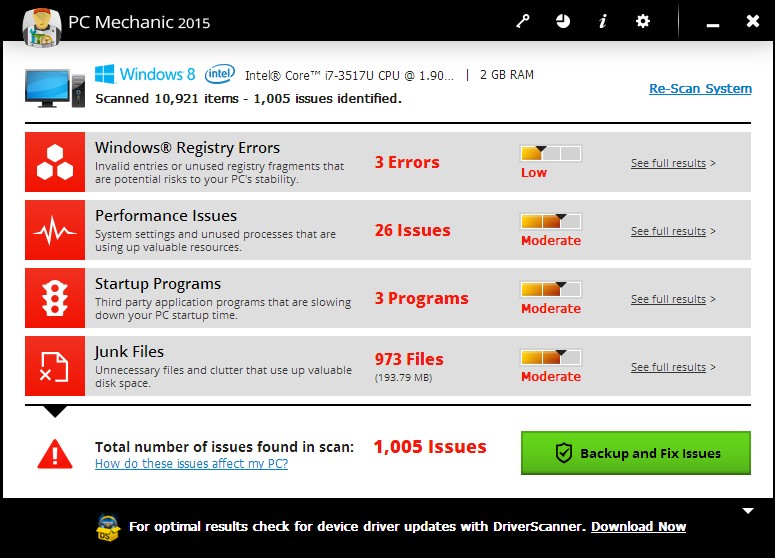 Once installed PC Mechanic 2015 performs a full scan of the affected system and displays security warnings about various threats that have been detected by the program. Cyber crooks that create rogue antivirus software often use scare tactics to lure users into buying a certain program.

Malware experts advise against purchasing the full version of PC Mechanic 2015 and deleting the rogue from your computer instead.

PC Mechanic 2015 can be removed with the assistance of a legit anti-malware tool. To delete PC Mechanic 2015 from your computer permanently, just follow the instructions provided below.