Spam in 2017: Cryptocurrency Scams Sneaked in the Inbox

A new report by Kaspersky Lab has revealed the most common type of spam messages that were being delivered in the wild in 2017. Apparently, the share of spam in mail traffic decreased to 56.63 percent, which is 1.68 percent less compared to 2016.

The country with the biggest amount of spam being distributed in the wild is the United States with 13.21 percent. 40 percent of spam emails were less than 2 KB in size, and the most common malware family located in spam emails was Trojan-Downloader.JS.Sload. 9 percent of unique users encountered phishing, the report showed.

Most Popular Spam Themes in 2017

As usual, and as is the case with the most common online scams in the wild, spam emails rely on hot topics to successfully trick potential victims. Researchers believe that this trend will continue to grow steadily. Some of the most common topics in spam messages in 2017 were natural disasters such as hurricanes Irma and Harvey and the earthquake in Mexico. Scammers pretending to be from Nigeria continued to spread messages asking for assistance in obtaining inheritance of deceased relatives.

E-Mail Spam Based on Cryptocurrencies

However, one topic stood out in 2017, and it is the topic of cryptocurrency. There were plenty of spam campaigns built on the hottest topic of Bitcoin and altcoins.

Cryptocurrencies gained “a foothold in advertising spam and fraudulent mailings” throughout 2017. The all-so-typical spam campaigns themed with “earn from home” promises, financial pyramids, fake lottery wins, etc., are now replaced with the theme of crypto. 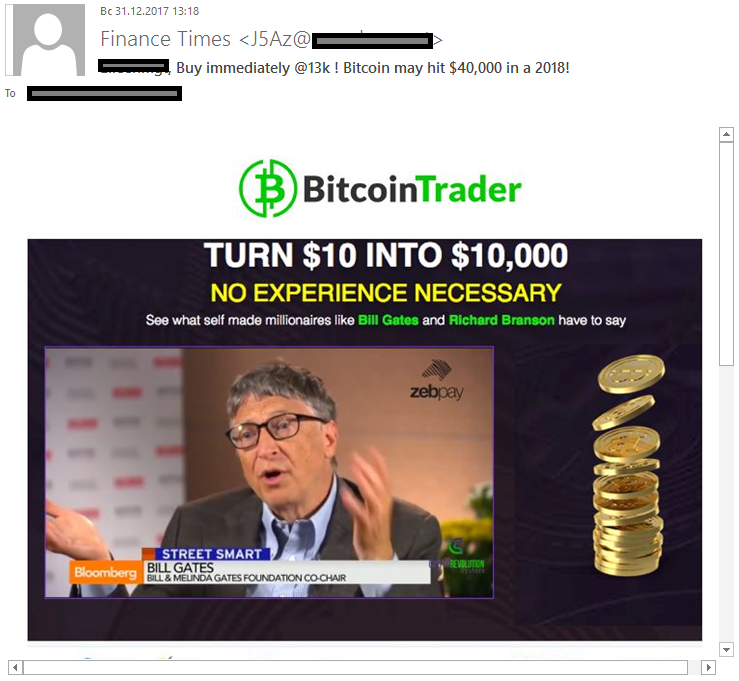 Another crypto-related type of spam delivered throughout the course of last year is seminars held on blockchain technology. These seminars didn’t give many specifics with technical details but still gave promises to teach users to extract profits from crypto coins. As pointed out by Kaspersky Lab researchers, these spam messages are similar to the previously popular scams on making a profit on the stock exchange.

A particular type of crypto-related spam stems from cloud mining services. These services rent out the mining power of their own specialized data centers. Fake sites offering such services have emerged. If the user is tricked into paying for the service, they won’t receive mining power and won’t have their money returned. There is also a pyramid motif as the user is promised to receive mining income if they enlist other users.

2017 also saw plenty of fake websites masqueraded as cryptocurrency trading platforms. One way to recognize such a cunning site is that it only accepts investments with no way to withdraw. Also, the revenue usually is made to grow quickly, which makes the user invest more funds.

Another type of crypto-related scams involved fake services offering to exchange one coin for another, or convert the assets into real money. To lure victims, scammers use favorable exchange rates.

To stay protected against the threat of spam and the malware that is often carried within such messages, users should rely on adequate protection.