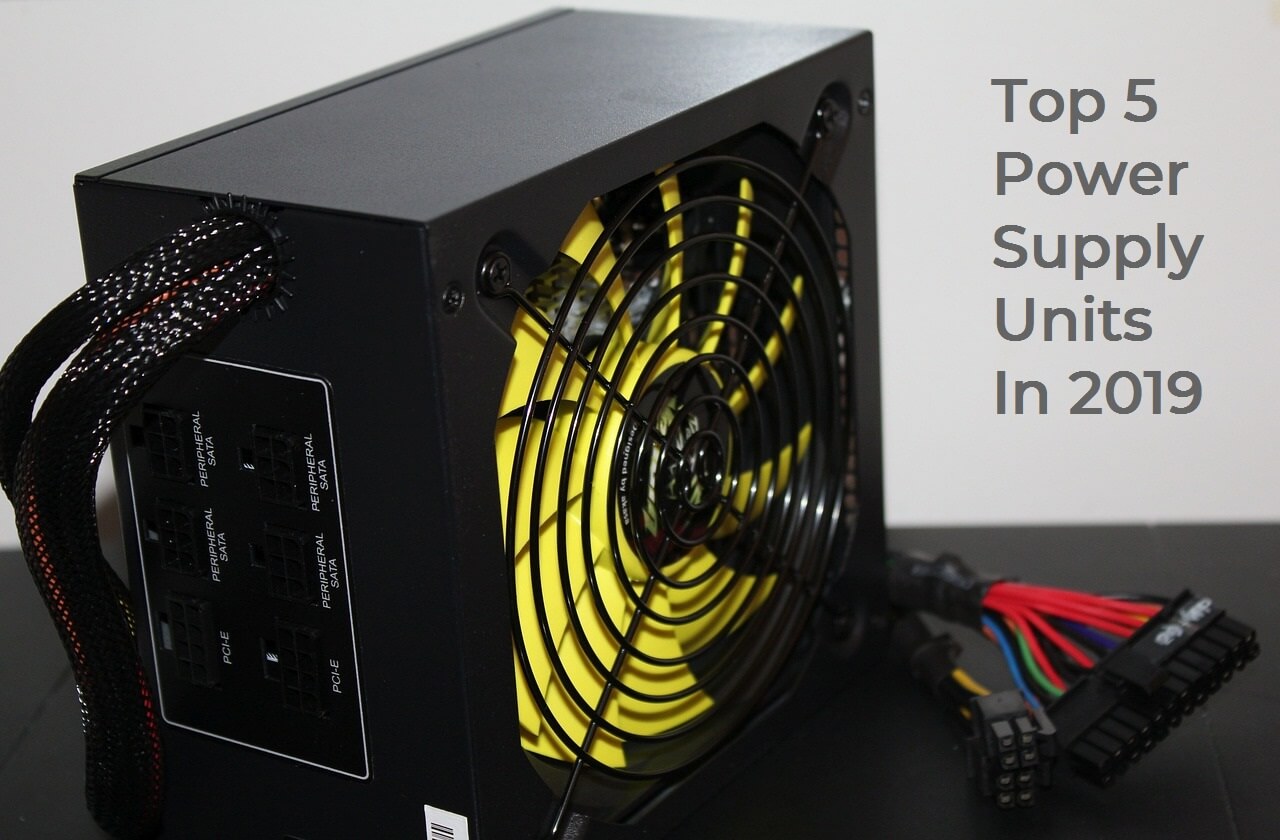 We at SensorsTechForum will lay out the top five best choices for power supply units – PSUs for short. Many tiers of quality exist for power supplies, with different efficiency-certification levels. The PSUs exposed in the article are chosen according to a few factors but they belong to the highest tiers for quality. We believe that to be quite important as a Power Supply is the heart of a computer machine. The same way a heart spreads blood to all vital organs in a human body, the PSU spreads electricity to all other components in a PC to power them. Thus, we recommend that you spend more money on this component and make it future-proof.

These power supplies will be showcased considering all factors stated above, but neglecting the price of the units. The warranty is also not a deciding factor as it depends for what purposes individual users utilize the PSU for. The best power supply in terms of efficiency and reliability (regardless of capacity) will be reviewed first with the other ones following that we have considered being almost as good as that one.

The 80 PLUS Titanium standard brought a fourth measurement into the certification mixture: efficiency at 10% rated load. And the lower the load, the harder it is to keep a high power factor. Initially, the 80 PLUS program required efficiencies higher than only 80 percent at three separate load levels, along with a single power factor reading, to qualify for its certification. With time the technology in PSUs evolved (allowing for higher efficiency levels), new certification levels had to be introduced to this program. Non-redundant power supplies were certified exclusively with 115V input, with redundant units being certified with 230V. Later, a 230V certification program was introduced for PSUs used in desktop, workstation, and server applications in non-redundant system builds.

However, the 80 PLUS certification shouldn’t be the only factor to consider when choosing a Power Supply, because that:

Having that covered, let us give an example for what efficiency is. Let us say you get a PSU that is 1000 Watts, but in reality draws 1100 Watts from the wall, which equals to 90% efficiency rating, and the additional 100 Watts produce just heat. With these things in mind, we can now go through our top choices for Power Supplies that you can get in 2019. 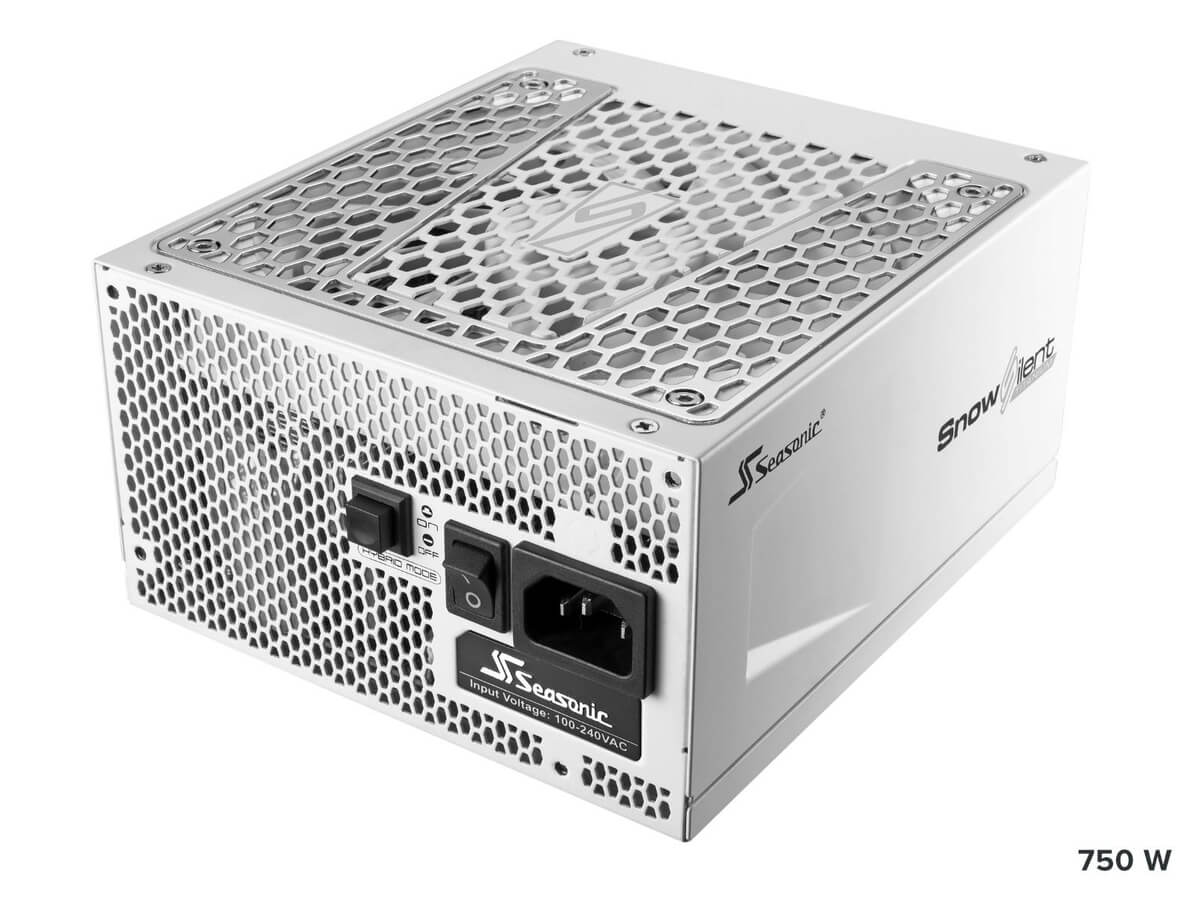 Seasonic PRIME Snow Silent is a Tier 1 power supply. It has the best 80 PLUS efficiency standard, holding a Titanium rating. Not cheap, but made with Japanese high-quality capacitors, this unit comes in three power outputs – 550 W/650W/750W. Only the 750 Watt one has Titanium rating with each one of a lesser capacity (output) going down one level. However, all three of them are Tier 1 PSUs that come with a 12-year warranty guarantee. This fully modular PSU is a masterpiece in terms of how it is built and what components it has. 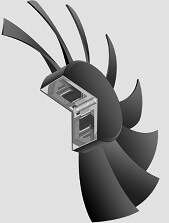 All three units in the Seasonic PRIME Snow Silent series have gold plated connectors for an increased lifespan.

High performance Fluid Dynamic Bearing fans are used for these series of PSUs. These fans generate considerably less noise and heat than ball bearing fans. The lubrication of the bearing surface reduces friction and vibration and lowers power consumption. Due to the effortless rotations and robust construction, this reliable fan technology increases the lifespan of the fan. As the fan shaft rotates, high pressure oil drifts along the grooves of the bearing sleeve to generate a thin layer of lubrication between bearing faces. With more speed, the dynamic oil pressure increases, which lifts the shaft from the bearing to create smooth rotations. The herringbone shape of the groves helps to efficiently channel the lubricant and avert leakage.

To sum up, here are the specifications for the Seasonic PRIME Snow Silent PSU: 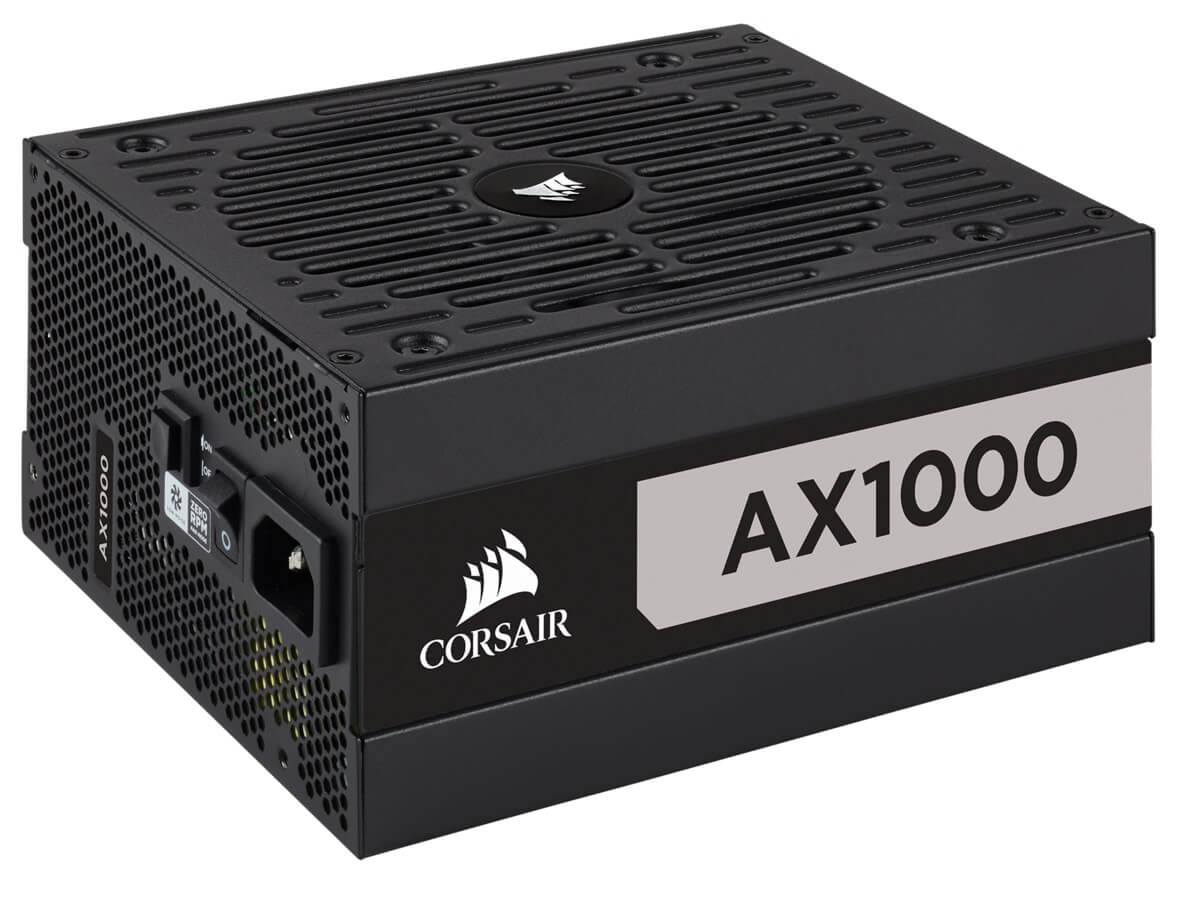 Corsair AX1000 was first introduced back in 2012 as the flagship and absolute premium among Corsair power supplies. The certification is now marked as a 80 PLUS Titanium and rightfully so. Corsair have many power supplies, ranging from the lowest tier to the highest tier possible with some mid-range tiers being discontinued. Corsair AX1000 truly holds its own and is given a deserved 10-year warranty period. The PSU a newer variant of the AX series that is actually closer to the AXi, but still marked without the last letter, and has the modern technology allowing software-control and Zero RPM mode which will save power and make the fan spin a lot less when the PSU is idling or using a really low percentage of its capacity.

Speaking of capacity the AX series have different variants, but with the Titanium efficiency rating it comes only with 850 and 1000 Watts versions. Even if you have somewhat of a high-end gaming PC, the 850W one should be absolutely enough. After all, spending more money for a more efficient PSU, should yield a lower electricity bill, but the more power the PSU drains from the wall, the higher the cost will end up to be. A fully modular design with all the capacitors inside being Japanese, this is an incredibly robust power supply.

To sum up, here are the specifications for the Corsair AX1000 PSU: 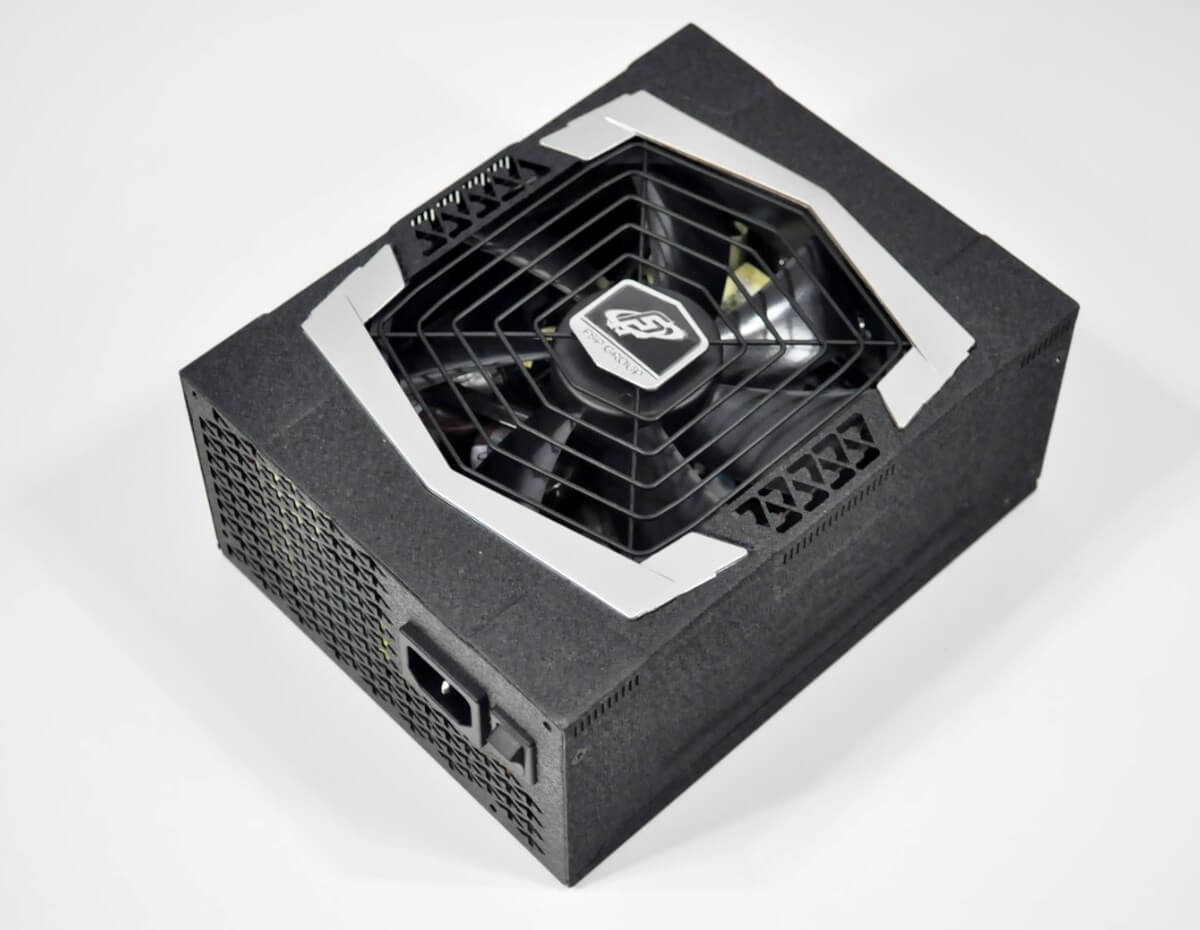 FSP Aurum PT is yet another Tier 1 choice for a power supply unit. FSP who are also the makers of Fortron PSUs have made a truly great unit. FSP Aurum PT has industrial grade capacitors of Japanese origin, a single 12V+ rail and a unique airflow technology. The arrow-shaped ventilation is made to provide remarkable air ventilation and superior cooling performance. The unit has a Platinum certification and a fully Modular design with soft cables. Owning an FSP Aurum power supply for over 7 years, we have never ran into problems, regardless of what we wanted to achieve on the computer.

Achieving 92% efficiency and having OCP, OVP, OPP, SCP, UVP, OTP protections on top of everything else, makes for a sturdy Power Supply that will last a long time and maybe over the stated warranty period, even if used for gaming on a daily basis. FSP Aurum PT comes in 850 Watt, 1000 Watt and 1200 Watt power outputs, but rest assured, all three of them have the Platinum badge and will perform great keeping every electric current within norm. You can even equip your computer machine with two or more video cards for all of your user needs. With the E-sync Remote Sensing technology you can synchronize 3.3V/5V/12V with stable signal, allowing the AURUM PT to provide better ripple/noise performance.

To sum up, here are the specifications for the FSP Aurum PT PSU: 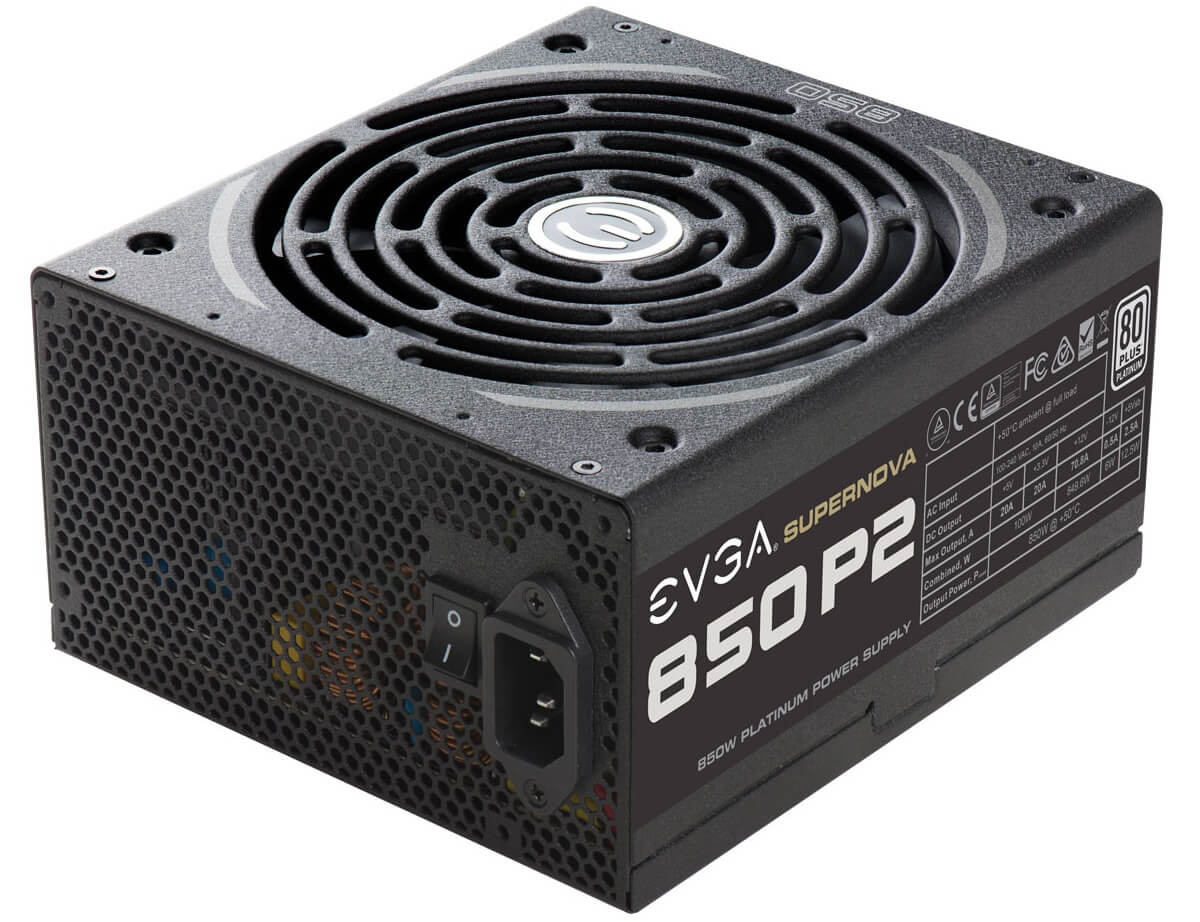 The P2 series are with a fully modular design, which is of no surprise considering that the high-end models of the competition are also running with that. Voltage regulation is nice and tight and the unit also has the following hardware protection:

Following a 100% Japanese capacitor design and making sure that the power provided to each component is clean and continuous the EVGA SuperNova P2 achieves between 92% and 94% efficiency. From 650 all the way to 1600 Watts, the EVGA SuperNova P2 has got you covered, be it for gaming, processing, rendering, mining or anything else that requires a lot of resources.

To sum up, here are the specifications for the EVGA SuperNova P2 PSU: 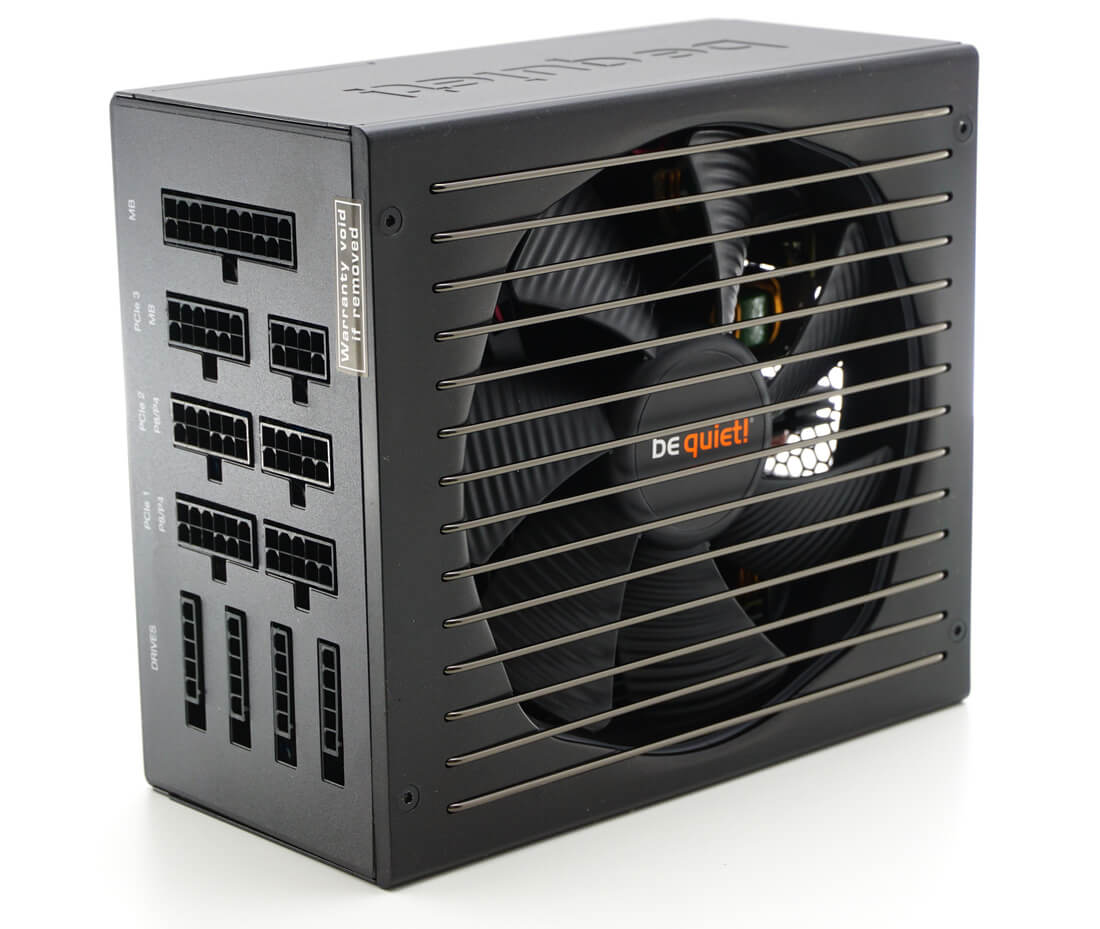 beQuiet Straight Power 11 is a newer model power supply manufactured by the makers of the popular beQuiet fans. The PSUs made by the company also feature their best fans for a quality cooling solution and ultra-low level of noise, even at 50% or 100% load. beQuiet Straight Power 11 has only a 80 PLUS Gold certified efficiency rating, which is surprising as it comes close to 92% efficiency under specific conditions. It is a fully modular unit that comes with a warranty period of 5 years which is the lowest among the previously mentioned power supplies in this article.

As it comes in variants from 450 Watts up to 1000 Watts, it is the perfect choice for a budget build, which will not be doing high-performance tasks most of the time and okay for moderate, casual gaming. Although you can buy a cheaper power supply, performing with nearly the same level of efficiency, this unit is extra quiet because of the special fan and air-cooling technology. The warranty period of this class is about the same with other brands. The newest model should be a Tier 1 power supply, but it might end up as Tier 2. If you are looking for something with less wattage and to balance out the price with the lower electricity bill later on, this model might just suit your needs.

To sum up, here are the specifications for the beQuiet Straight Power 11 PSU:

This classification is not in any way a buyer’s guide, although it reflects most notable points in terms of efficiency and stability of power supplies. In general, you should note, the lifespan and stability of PSUs depend on their capacity and for what purposes a user utilizes them. All of the PSUs described in the article are of Tier 1 level, which is the highest quality. Even so, if you are running a really high-end gaming system (especially if you overclock) or a mining rig, do not expect for a PSU to survive all years of a given warranty.