55 Percent of Apps Are Widely Outdated, Including Skype and VLC Player

Running outdated software hides huge risks but many users (both home and enterprise) do it anyway. According to a new security report, 55 percent of applications installed on machines worldwide are outdated, meaning they have not been updated to the latest, most secure versions.


The Most Outdated Apps Include Adobe Shockwave, VLC Media Player, and Skype

The findings belong to Avast’s PC Trends Report for 2019. Apparently, the list of out-of-date applications includes popular apps such as Adobe Shockwave, VLC Media Player, and Skype. Here is the complete top 10 list: 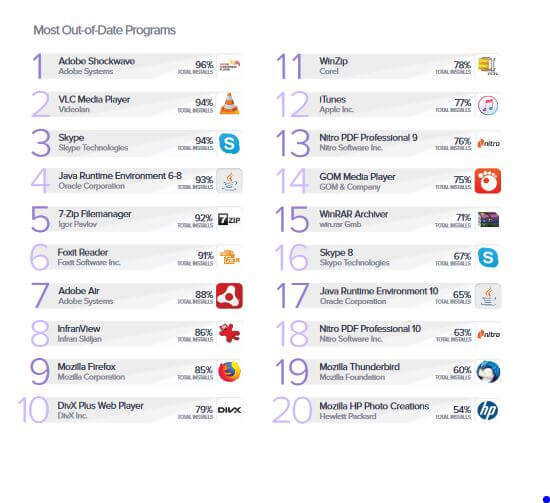 According to the report, Java is also widely un-updated. It should be noted that Java’s versions 6, 7 and 8 are still widely installed on user devices, and no longer up-to-date. Even users who are on the latest Java version 10 release should check for updates regularly to avoid any security issues, and this is valid for any software application.

One of the most out-of-date applications is the VLC Media Player. This is likely due to older versions of the software not notifying the users about updates. Skype closely follows, as most users are still on the older version, Skype 7 Classic. Microsoft has not enforced the update to the new Skype 8, but Microsoft has been gathering user feedback and encouraging users to upgrade.

If Skype, for example, is out-date-date, this poses huge security risks and opens the door to possible exploits. Let’s take a particular vulnerability which was discovered in October last year. [wplinkpreview url=”https://sensorstechforum.com/cve-2018-4013-mplayer-vlc/”]CVE-2018-4013 is a code execution flaw which is caused by the way HTTP requests are made. Hackers can craft a special packet causing a stack-based buffer overflow which can be used for code execution. Patching is crucial to avoid such and other exploits.

The report is based on anonymized aggregated data taken from 163 million devices. Other findings highlight the growing number of computers using Windows10. Microsoft’s latest operating system is currently installed on approximately 40 percent of computers on a global scale, meaning that Windows 10 is competing with Windows 7’s share of 43 percent. It is worth mentioning that 62 percent of computer users upgraded to Windows 10 on their older PCs instead of new ones. That being said, the average age of a computer in 2018 has increased to six years,from five and a half years in 2017.

To top that off, it turns out that millions of users are running outdated versions of Windows 10. Even though Microsoft has started issuing more frequent incremental upgrades, for free, many users continue to use older versions of the operating system. More specifically, eight out of ten users worldwide are on the 1803 update from the first half of 2018, while only less than 1% of users are on the infamous October 2018 update, which has been delayed and rolled back for various issues, the report says.

A curious finding is that more users are choosing laptops, tablets, and 2-in-1 computers that run on Windows. The shift to mobile technology also reflects the installed applications. Google Chrome, for example, is at a top position last year, with its installs jumping to 91 percent from 79 percent over the course of 2018.