”Redstone 5” or otherwise known as the Windows 10 October Update (1809) has finally been released. With that release however, complaints started to pile up over the weekend and they continue growing. Rightfully so. Their personal data and countless files were simply deleted from their disk drives and the October Update was the cause. Not only that, but for some the Windows OS has silently cut off their automatic backups since February, this year.

Frustration and backlashing has been observed all over the “Microsoft Answers” forums. Users have been trying to restore their files and fix other major bugs since the update came out. Things have got even more heated since then, especially over this weekend, when the supposed “solutions” given by Microsoft employees and community MVPs failed to reverse the damage done by “Redstone 5”.

The Events of Redstone 5 and Aftermath

Microsoft pulled the October 2018 Update (1809) on the 7th of October, but it was a bit late to do so, as the majority of Windows 10 users who update their system consistently, were already anticipating “Redstone 5” for quite some time and the damage had already been dealt on the first day of release.

Related Story: Windows 10 October “Redstone 5” Update – What Will It Have

Among the glitch with the deletion of users’ files, many other major bugs which are considered breaking have occurred as well. Some of the most commonly found are the following:

With the amount of issues that users are currently seeing, it is no wonder that they are reacting in this way and searching for ways to somehow fix their Windows issues and retrieve their files back.

As per the deletion of files in Windows after the installation of the Windows 10 October Update (1809), people are sharing information in the Microsoft forums as to why the glitch may have happened: 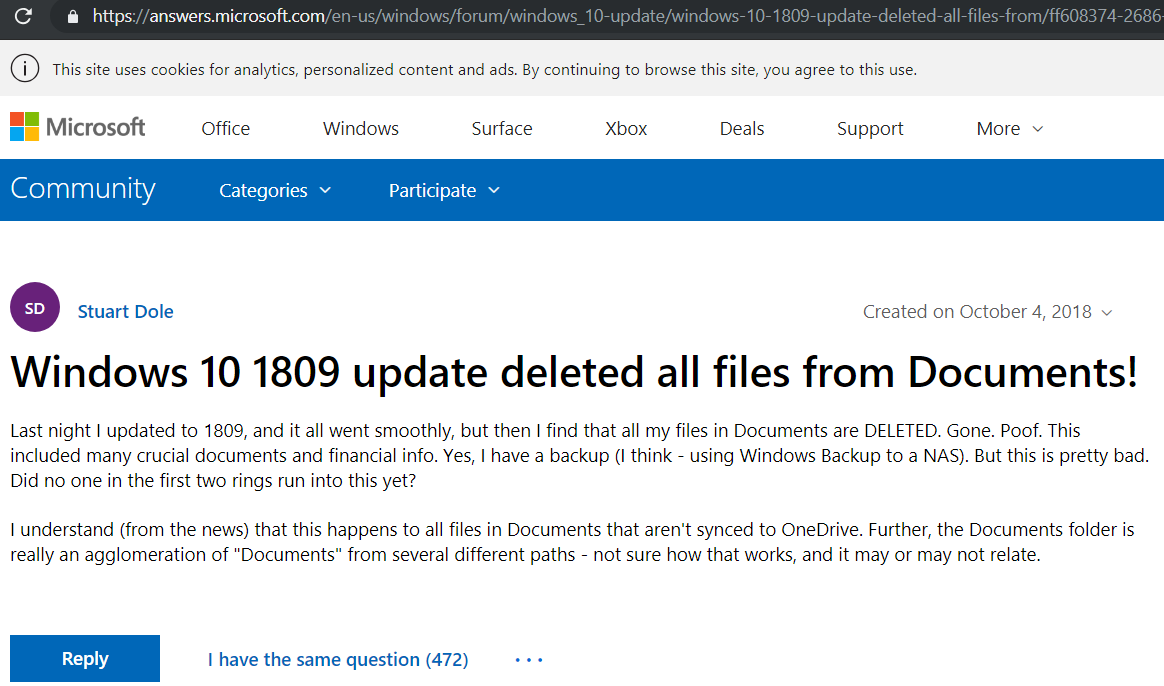 Microsoft employees, who are working behind the 1-800-MICROSOFT phone tech support line, have given different advice to people contacting them about the issue with the deleted files. A user shared in a Reddit post that level 1 agents just tell you to run System Restore, while level 2 will try using NTFS File Recovery software. There isn’t a wrong way to go about it really, but many victims suggest NOT doing a System Restore as that vastly increases the chances of more space being taken up by the process and the files getting inadvertently lost forever without a trace to be found.

How to Recover Your Missing Files?

Currently, there are many theories, but only two methods have been tested and proven to work for some users who lost their files after the Windows 10 October Update (1809). Both methods require victims to not use a system restore point or System Restore and related services from Microsoft at all.

The first method suggests restarting your computer device from three to four times without shutting it down after the update has been installed. The second method is to use a Data Recovery Program similar to Stellar Phoenix Data Recovery Software.

That is if your backups are lacking or have failed to complete its original purpose. A prevention tactic that you can do to stop future updates messing with your system is to postpone them until Microsoft do a few overhauls and iron out the kinks afterward to polish the update as much as possible before putting it on your system. Be careful and always read about an update before applying it blindly.