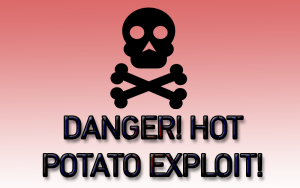 Windows is vulnerable and this is not a secret to anyone. However, Windows vulnerabilities are not discussed as often as they should be. Several months ago, we informed you about a particular exploit in Windows 10 known as the Multihandler exploit.

Now, researchers at Foxglove Security have unveiled another weak spot in Windows that affects almost all of its latest versions. The exploit is dubbed Hot Potato and has been discovered by putting together a series of known Windows security flaws.

The exploit itself was created on the basis of a proof-of-concept code released by Google’s Project Zero in 2014. The Foxglove’s research team has presented their findings at the ShmooCon security conference recently held in Washington. The researchers have also shared Hot Potato’s code on GitHub.

What is quite alarming about Hot Potato is that it can be activated by three types of attacks that were disclosed about 15 years ago, in 2000. In other words, all of the vulnerabilities that take part in Hot Potato have been left unpatched.

Is there any explanation given by Microsoft? Just an odd one saying that patching the security flaws could have broken compatibility between the different versions of Windows.

As explained by Softpedia, the three vulnerabilities representing Hot Potato are:

Researchers believe that using the three exploits one by one may take malicious actors from several minutes to several days. However, if their attempts are successful, they can elevate apps’ permissions to system-level privileges.

The worst part is that the researchers succeeded in breaking the following versions of the operating system:

Proper mitigation techniques are yet to be investigated. However, researchers say that enabling the Windows’ Extended Protection for Authentication should put an end to the last stage of Hot Potato.