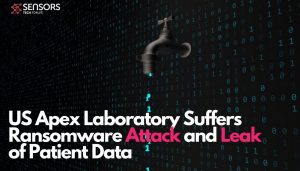 One of the latest significant data leaks has compromised the data of patients in the United States.

Apex Laboratory, known for providing medical testing for individuals, doctors, and facilities in New York City, Long Island, and South Florida, suffered a ransomware attack. The attack led to patient data being stolen and posted on a leak website. According to the official statement, the laboratory became aware of the ransomware attack on July 25, 2020, when “certain systems in its environment were encrypted and inaccessible.”

Once Apex found out about the intrusion, the laboratory quickly secured its network with third-party forensic and cybersecurity specialists. So, what did the experts discover during the forensic analysis?

After a thorough 3rd party cyber forensics analysis, the investigation initially determined that there was no evidence of unauthorized access or acquisition of patient information. However, on December 15, 2020, Apex learned that the hackers posted information on their blog about the attack and listed data taken that contained personal and health information for some patients, the statement says.

Apex Laboratory ransomware attack: What type of patient data has been compromised?

It should be noted that the investigation hasn’t been concluded yet. At this moment, compromised data is believed to include highly sensitive information, such as:

Has this data been abused in some way? Apex’s statement says that they are unaware of attempted misuse of the information, other than extracting it as part of the ransomware attack. The organization is now preparing written, mailed notice to impacted individuals. If you believe you are also impacted, you should call the incident inquiry hotline at (833) 971-3310 for additional information.

Ransomware attacks against healthcare facilities continue during the Coronavirus (COVID-19) outbreak. Some of the attacked facilities are taking care of patients with respiratory complications and serving as virus-testing labs.

Attacks against these facilities further convolute a situation that is already severe enough for governments to handle worldwide. One such example is the attack against Champaign-Urbana Public Health District . Last year, Netwalker ransomware operators, also known as MailTo, launched the attack against CUPHD, which servers approximately 210,000 people in central Illinois. More information is available in our article on the ransomware attacks against hospitals.