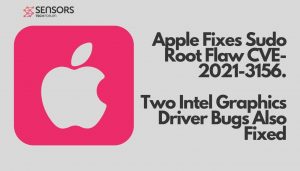 A successful exploit scenario could allow unprivileged users to obtain root privileges on the vulnerable host. Qualys, the company that reported the flaw, indepently verified it and developed multiple variants of exploit to obtain full root privileges on Ubuntu 20.04 (Sudo 1.8.31), Debian 10 (Sudo 1.8.27), and Fedora 33 (Sudo 1.9.2).

A couple of weeks later, it turned out that Macs running the latest version of Big Sur, 11.2, were also prone to the exploit. Apple didn’t have a fix for the bug until yesterday.

Fortunately, Apple has already released a patch for the critical sudo bug in macOS Big Sur, Catalina, and Mojave. The flaw could enable unauthenticated local users to obtain root-level privileges on the affected system.

– “A race condition was addressed with additional validation,” according to the advisory. The vulnerability is fixed in macOS Big Sur 11.2, macOS Catalina 10.15.7. The vulnerability could also enable arbitrary code execution with kernel privileges.

If you haven’t opted for automatic updates, you can go Apple menu, select System Preferences, and click Software Update. This way, you will download and install the latest patches needed for your security.

Apple Was “Pwned” at a Chinese Hacking Content Earlier This Year

Did you know?
Apple was one of the companies, pwned at Tianfu Cup hacking contest, China’s biggest hacking competition. In this year’s edition, several tech-giants were “pwned”, including names like Microsoft, Samsung, VMWare, Google, and Apple.

The organizers confirmed successful exploits, some of which completely new, against software such as iOS 14 running on an iPhone 11 Pro and Windows 10 v2004 (April 2020 edition).