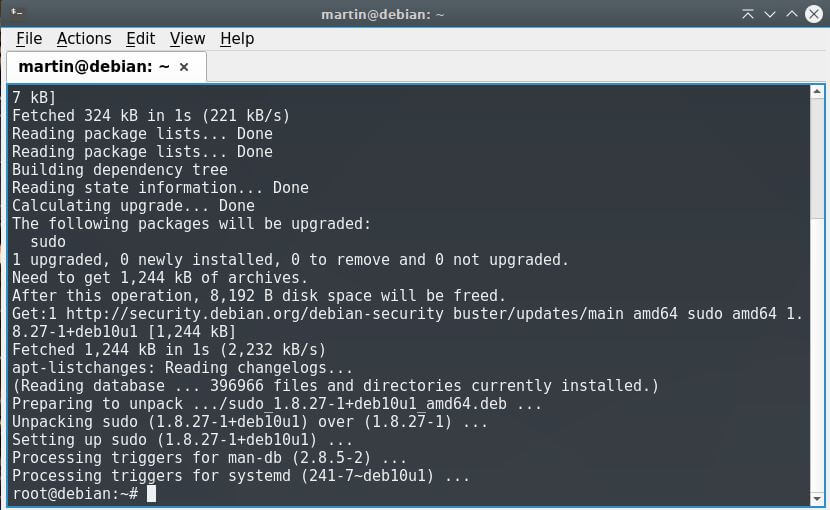 Sudo is considered one of the most important and widely used programs for Unix- and Linux-based operating systems that allows a permitted user to execute a command as the superuser or another user, according to the security policy. The program is “shipped” as a core command on nearly all Linux systems.

Note: Screenshot by my colleague Martin who already updated his distro. You should do the same.

The CVE-2019-14287 vulnerability involves the way Sudo implements running commands with arbitrary user ID. Sudo versions prior to version 1.8.28 are all affected. According to the official RedHat advisory, if a sudoers entry is written to allow the attacker to run a command as any user except root, this flaw can be used by the attacker to bypass that restriction.

It should be specified that exploiting the bug successfully requires the user to have Sudo privileges that allow them to run commands with an arbitrary user ID. Usually, this means that the user’s sudoers entry has the special value ALL in the Runas specifier. If a sudoers entry is written in a way to allow the user to run a command as any user except root, the vulnerability can be used to avoid this restriction.

What does this mean?
On nearly all Linux distributions, the ALL value in RunAs specification in the /etc/sudoers file enables users in the admin or Sudo groups to run commands as any valid user. Because privilege separation is a rudimentary security principle in Linux, admins can configure a sudoers file to determine the type of commands specified users can run. Even in cases when a user has been restricted to run commands as root, the flaw could enable the user to circumvent the security polity to hijack the control of the system.

Did you know?
Another serious vulnerability was unearthed in Sudo in 2017. CVE-2017-1000367 was a severe root Linux bug discovered by Qualys Security researchers. The flaw resided in Sudo’s “get_process_ttyname()” function for Linux and could allow a user with Sudo privileges to run commands as root or elevate privileges to root.