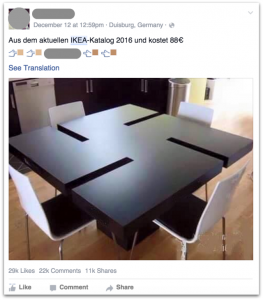 Unfortunately, Facebook hoaxes and scams are something quite regular and many users get fooled on a daily basis. One of the currently viral hoaxes involves IKEA. An image of a dinner table dubbed Hadolf shaped like a swastika has been circling Facebook.

The image also provides information about the price of the item – 88 euros, and it features the name of IKEA as it was one of the company’s 2016 catalog additions.

Scams to Keep Away from:

Interestingly enough, ‘88’ is considered a code used by neo-Nazis to say ‘Heil Hitler’.

As you may have guessed, the image is not real and it is part of a scheme that aims to harm IKEA’s reputation. Social media posts like this one are problematic because they go viral quite quickly and they are also hard to track to the original source.

The German newspaper Berliner Zeitung was the first to write about the story this Monday, December 14. Then the news itself went viral and was covered by media around the Globe.

It is now known that a user in Germany has posted a version of the scheme on December 12. His post has been shared 12,000 times, the Like button being hit by 29,000 people.

Of course, an IKEA spokesperson has already confirmed that there was nothing true about the post. Daily Mail has even reported that the company is threatening legal actions against the hoaxsters.

We remind you that such hoaxes may seem harmless or even funny, but they may end up harming your personal information. Keep in mind that clicking on fraudster images is not considered safe.