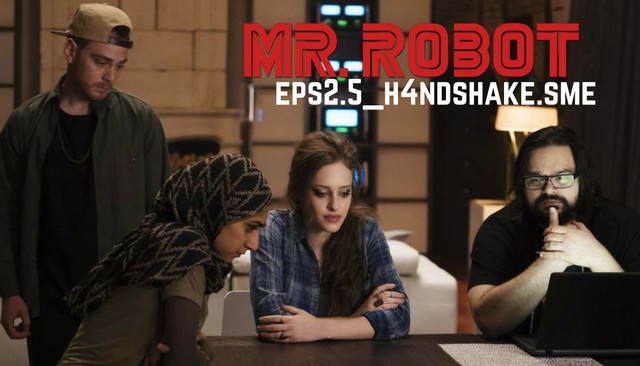 Mr. Robot is an emotional roller coaster with some strong pinches of hacking. Surely, some episodes are more hack-oriented than others but mostly, everything leads to the same place – what all our beloved characters have at stake and how they are all interconnected. Strictly speaking, when one major plot twist happens in Mr. Robot, be sure that we’ll be blown far, far away by its butterfly effect.

Mr. Robot 7th episode, eps2.5_h4ndshake.sme, is more focused on that major plot twist than it is on the hacking. First of all, what’s the tech meaning of a handshake?

On Mr. Robot’s side:
Well, the whole episode is based on deals:

ECorp’s risk management team definitely has a lot to do with IT security. So, why would Angela want to be part of a team evaluating all the potential risks of hacks and data breaches? One thing is definitive – the more involved Angela becomes with ECorp, the more we get caught in her web of determination. The corporate professional and the vengeance-driven daughter. It’s getting harder to distinguish those two, isn’t it?

We don’t see an attack executed from start to finish (except the one involving Ray but it’s more implied than displayed) but we rather witness the consequences of previous hacks.

Agent DiPierro quickly puts two and two together and knows that Angela has hacked ECorp and has erased any evidence. This is the scene where the ECorp employee is stressing about the missing company archives. I am utterly entertained by the encounters of Dom and Angela, and here’s why. Angela is far more than the angelic blonde with a baby face – she has a raw side and allegedly her motivation for righteousness has no boundaries. She has a purpose and she’s doing everything in her power to accomplish it. 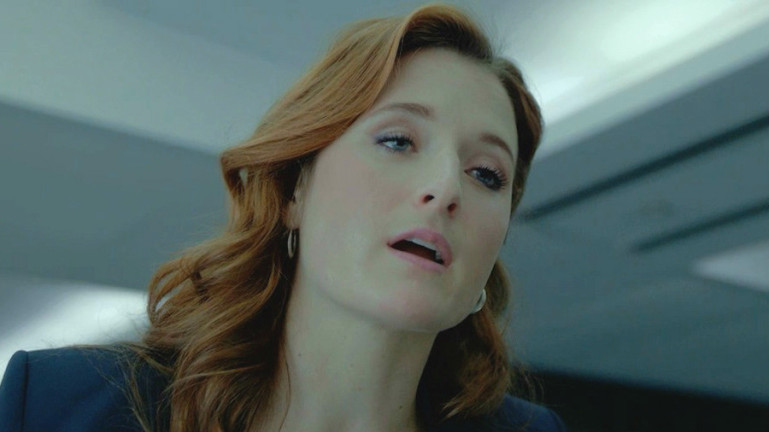 There’s a lot more to Dom than meets the eye, too. We had a deeper glimpse into her innuendo when she had that private conversation with Whiterose. Whiterose saw something in her, a chance, why else would he bother telling Dom about his “sister”? I definitely felt that Whiterose was “recruiting” Dom.

Could it be that somewhere down the road, Dominique and Angela would end up working together, working towards the same goal?

Or is that theory far-stretched? Nonetheless, I am not the only one believing that the key to solving the Mr. Robot big riddle lies with Whiterose.

Putting Dom and Angela aside, Ray’s story also goes through a process of development. We are given all the missing pieces of that puzzle (case closed!), and we also see Ray’s remorse over everything that has happened.

In this episode, we also witness the death of Ray’s site which is an evil version of recent dark web marketplaces. This is where some actual hacking is implied. Elliot does his tricks and eventually the website is taken down by the FBI.

To rewind a bit, in the eps2.3_logic-b0mb.hc episode, Elliot went against Ray’s explicit commands and ended up being punished for looking, physically punished. Against all odds, in the end Elliot succeeded in logic bombing the FBI. But what did he see in Ray’s website that instantly made him go last-season-Elliot (denouncing wrongful people)?

Midland City looks like the worst possible underground site, and the worst thing about is that it’s based on a real story.

The Silk Road was a website created via TOR. Launched back in February of 2011 by a user with a nickname Dread Pirate Roberts, the site was an online black market for illegal drugs purchase or trade. The focus of the site was to offer a safe place for illegal substances to be bought and sold, and ultimately to drive down crime.

By June of that year, the government knew about the site and Chuck Schumer, an American politician, the senior United States Senator from New York and a member of the Democratic Party, made it his mission to get the D.E.A. to shut the site down. After a manhunt that lasted about two years, a man, Rob Ulbricht, was detained and indicted on charges of money laundering, computer hacking, conspiracy to traffic narcotics and the attempted murder of six people. According to the intel, Ulbricht was “Dread Pirate Roberts.”

However, there are theories that Ulbricht is indeed innocent of the last charge, stating the government used him as a poster child for The Silk Road (via Aaron Pruner). In addition, multiple people may have been using the “Dread Pirate Roberts” handle.

But let’s go back to how Elliot successfully brought down Midland City:

The biggest threat to dark websites is the owners themselves, indeed.

We are four episodes away from the season finale and we definitely need affirmations. Is Tyrell really dead? Is Elliot really OK with Mr. Robot’s eternal sunshine?

I would also like to see these addressed and somewhat resolved:

P.S. Since real life hackers are already starting to adopt hacks from Mr. Robot (like fsociety Ransomware), maybe we should be on the lookout?