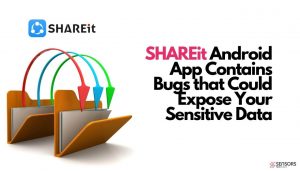 Have you been using the Android version of the SHAREit app?

Unfortunately, it turns out that the app, which has more than one billion downloads, contains unpatched vulnerabilities. The app’s developer has failed to address the bugs for more than three months.

It is crucial to note that the vulnerabilities don’t affect the iOS version of the app.

The vulnerabilities were discovered by TrendMicro researchers. If exploited successfully, the bugs could leak users’ sensitive data and execute arbitrary code with SHAREit permissions by using a malicious app or code. The researchers warn that the vulnerabilities could also lead to remote code execution attacks on vulnerable devices.

“In the past, vulnerabilities that can be used to download and steal files from users’ devices have also been associated with the app. While the app allows the transfer and download of various file types, such as Android Package (APK), the vulnerabilities related to these features are most likely unintended flaws, “ TrendMicro added.

Since the app has almost a billion downloads in Google Play, the impact of the flaws could be devastating. “Google has been informed of these vulnerabilities,” the report noted. Proof-of-concept code was also created to analyze how the vulnerabilities work in depth.

What is causing the SHAREit vulnerabilities on Android devices?

The lack of proper restrictions allowing access to the application’s code. If a malicious app is installed on a device, attackers can send malicious commands to SHAREit to hijack its legitimate features and run custom code. This would overwrite the app’s local files could allow the installation of third-party apps without the user’s knowledge.

That’s not all, however, as TrendMicro’s report shows that the popular application is also prone to man-in-the-disk attacks:

This Is because when a user downloads the app in the download center, it goes to the directory as shown in the sample code. The folder is an external directory, which means any app can access it with SDcard write permission, the research team said.

The vulnerabilities were reported to the app’s developer. However, the researchers haven’t received a response yet. Thus, the team decided to disclose their research “since many users might be affected by this attack.” The worst part is that the attack is “not easily detectable.”

In 2019, the same application was found to contain flaws allowing hackers to bypass device authentication and steal users’ files from their devices.