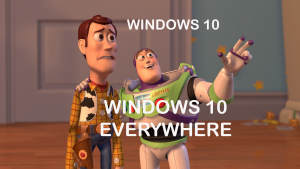 Have you switched to Windows 10 yet? Microsoft’s attempts to force its latest operating system on as many users as possible aren’t a secret. Microsoft’s Corporate Vice President Joe Belfiore even admitted it recently by claiming that core data collection is ‘helpful to the ecosystem and so not an issue of personal privacy, that today we collect that data so that we make that experience better for everyone.’

Advertised as the most user-friendly and secure Windows, the 10th edition has won many adversaries mostly because of its build-in telemetry. Also, let’s not forget that Microsoft definitely has a plan they seek to accomplish. The corporation’s end goal is Wind10 running on 1 billion devices in the next couple of years. The saying that the end justifies the means perfectly suits the situation with the Win10 nagware and unwanted upgrading.

Even users that decline the Windows 10 installation may be ‘exposed’ to Microsoft’s telemetry services. Users who install Windows updates automatically may end up with components that they don’t really want or need. We already wrote about the multiple cases of users ending up with an unwanted Windows 10 installation despite declining the ‘offer’. In a nutshell, Windows updates tend to act out and cause unpleasant surprises of diverse nature. https://sensorstechforum.com/uninstall-ms15-115-kb-3097877-causes-outlook-issues/

The Win10 nagware and tricky Patch Tuesdays have ‘inspired’ many tech-savvy users to find a way to stop the telemetry once and for all.

Here’s the solution originally published on the Bulgarian forum hardware.bg by the user known as Trial.

As explained by Trial, his solution is a combination of two tools that will put an end to the nagging telemetry.

GWX removes the throbbing Get Windows 10 icon that pops up as a notification in the down right corner of the screen. Other ‘extras’ GWX Control Panel will neutralize include:

The second one is a script for Win 7/8 that blocks all the telemetry updates out there.

This is what it does:

It’s not relevant which tool you will run first.

NOTE
You should note that after running the script, Windows Update may not work properly. The updates removed by the script may start reappearing in an aggressive manner, even when the ‘Hide Update’ option is applied. This doesn’t mean that the script doesn’t work, it means that Microsoft will not give up easily.

Also, make sure to join our forum topic to share your experience with these tools!