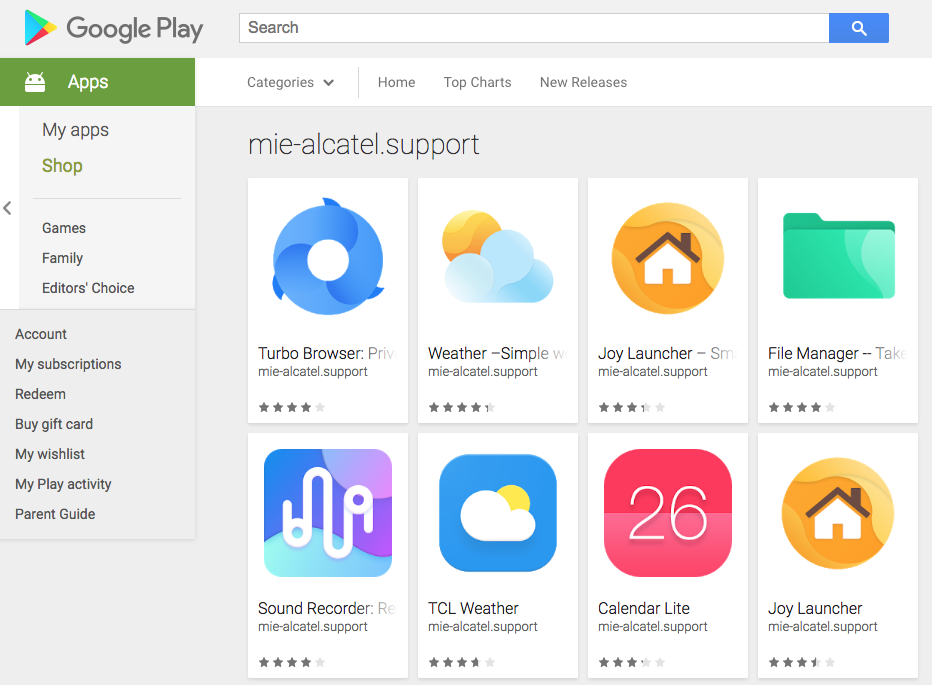 A new security report shows that Alcatel smartphones contain an Android malware called TCL Weather. It was found installed on two phones and available on the Google Play Repository as well.

Embedding malware code in Android apps and attempting to coerce victims into installing it is one of the most popular tactics used by criminals. However a recent attack campaign has been identified to be caused by an even easier and more alarming method — pre-installed applications by the manufacturers. This is the case with Alcatel phones which were found to contain such instances. Public disclosure about the problem was reported by Upstream, a carrier billing fraud company. We remind our readers that Alcatel is owned by the TCL Corporation who release devices under various brands, including BlackBerry.

The malicious code itself is found in the application called TCL Weather which itself is developed by the same company and pre-installed on their devices. Additionally it is available on the Google Play repository — more than ten million downloads have been recorded so far. The security issue is not intentional, it was found that at one point during last year the application was infected with malicious code. Even after the bug was fixed TCL has not responded as to how this service was hacked.

The weather service was found to harvest user data and send them to a server located in China. According to the investigation this includes the following information:

Two models have been to be affected by the bug as the weather service was pre-installed on them — the Pixi4 and A3 Max. Other devices can also be affected as well as any Android user who has downloaded the dangerous plugin from the Google Play Store repository.

Related: [wplinkpreview url=”https://sensorstechforum.com/google-refused-patch-vulnerability-android-chrome/”]Google Refused to Patch a Vulnerability in Android Chrome for 3 Years

What The TCL Weather Malware Could Do to Your Phone?

The security reports indicate that the Android malware has impacted quite a few devices. The dangerous code attempts to subscribe the impacted devices to premium phone numbers which leads to expensive phone bills.

One of the largest incidents involving this particular malware was done in Brazil where 2.5 million transaction attempts were confirmed to be coming from the weather service. The contaminated devices all sent SMS messages to premium phone numbers attempting to pay for expensive digital services. Fortunately they were blocked by the carriers. This short-lived campaign took place in July and August 2018 before changing its tactics. The first wave of attacks numbered 128,845 unique phone numbers. The second attempt was for another premium service which was also blocked in due time. This happened in the same time period totaling 428,291 transaction attempts.

Two other campaigns which were confirmed by this malware are the following:

According to the news reports the Android malware was found in seven markets and if it was successful it would lead to losses of around $1.5 million to device owners.

Upstream purchased a device from a former owner and reported that adware-like behavior has also been identified. Analysis of the weather app code reveals that upon launch it will start a hidden browser data with preset landing pages. This process will click on the placed ads which will generate income for the hacker operators. As a result of this the analysts report that between 50 to 250 MB data was recorded each day in such automated activities.

Investigation of the infected phones also shows that the malicious APK files include excessive Android permissions:

Even though the company has not announced announced the origins of the malicious code there are two possible reasons which are considered the most likely:

All dangerous versions were subsequently removed from the Google Play store.