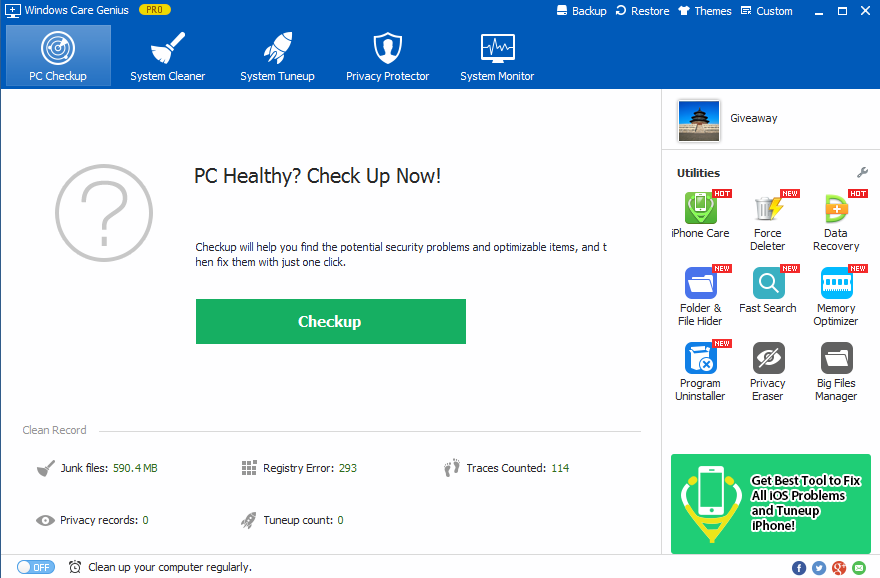 N.B. The following article is a review of the Windows Care Genius tool. We have tested the tool on both Windows 7 and Windows 8.1.

Windows Care Genius is quite fast – most actions are completed in less than two minutes and some scans are done after just a few seconds. The speed doesn’t affect the thoroughness of the processes.

The program has 5 main sections:

These sections all have sub-sections, except the first one, which combines the most important features of the program in a nutshell. Windows Care Genius has a PC Health Index that rates how well your system is doing with a 10 score system, where 10 is the best possible result. 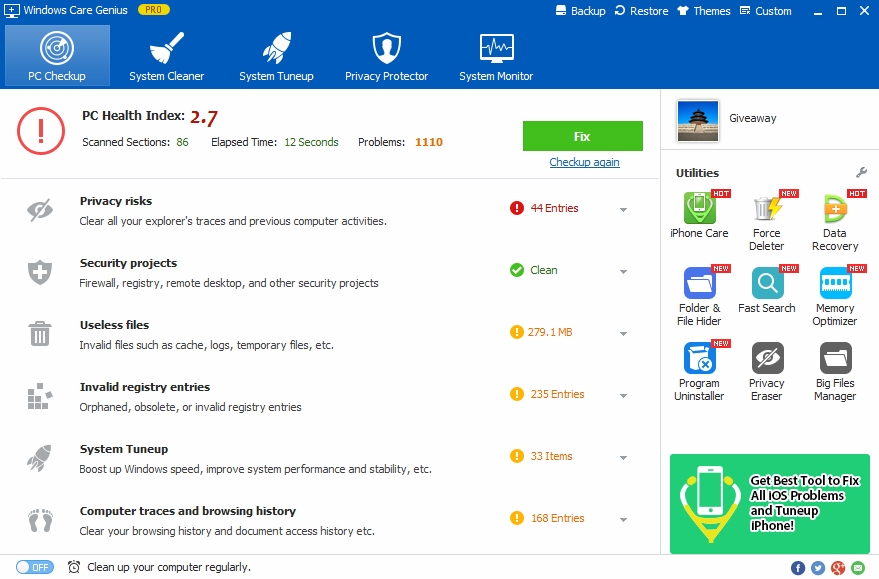 Privacy Risks and Computer traces and browser history search to erase information of what files and folders you have accessed as well as any activity on your PC and browsers. The features contain the Privacy Eraser sub-section of Privacy Protector and some part of the Common Cleaner sub-section of System Cleaner.

The Useless Files feature is the same as the Common Cleaner feature from the System Cleaner section. These two features do almost the same as the Windows inbuilt Disk Cleanup tool but they exclude checking for dump and debugging files. This is something we like because it is not advisable to delete such files, especially when a user has the following problems with his PC:

The Invalid registry entries feature finds the very same issues discovered by Registry Cleaner, plus additional registry entries about accessed file history. This means that if you have deleted files, invalid file paths or registry entries that are unused, or ones about your visited places, they are all going to get wiped out.

System Tuneup here is the System Optimizer sub-section of System Tuneup. It is used to increase the system’s speed and improve system performance, as well as the start and shutdown of your PC. There is some Network Speedup feature with a bunch of options, claiming that it will optimize networking. We tested it, and it proved untrue like we expected – networking speed cannot be improved by software.

It takes only 3 minutes to backup registry files and 35 minutes to restore them. “Create a system restore point” and “Create a full registry backup” features of the program are done by accessing the corresponding Windows features. These two processes can be done by Windows alone, but having a shortcut to those functions for easy access is nice, considering that not every user is familiar with them. 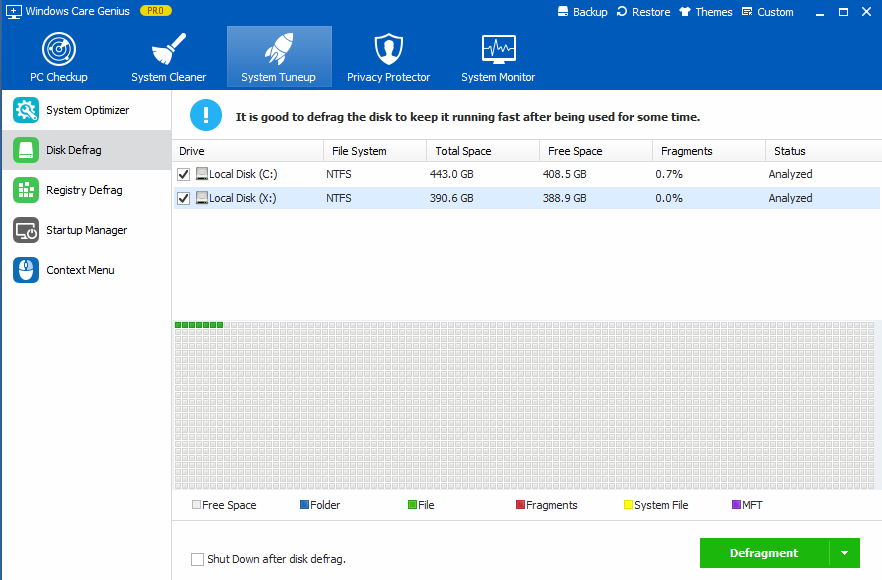 Disk Defrag – it doesn’t deviate much from the Windows in-built defragger. It can take a couple of minutes for hard disks that aren’t fragmented regularly, and it can take hours for other disks which require more than 30% defragmentation. The feature frees the same space as the Windows defragger, but opposed to it, it gives a warning message for SSDs (Solid State Drives), saying that it may shorten the disk’s life. Note that SSDs are built with a different technology and have a more limited number of read/writes. Newer SSD models seem to be better, and defragging appears to affect them less.

Registry Defrag – tests on multiple machines with different age of usage shows almost the same results – only a small difference in size, around 1-2 MB. Considering that the total size of all registries is about 200~300 MB in size, that isn’t a big deal. In addition, even the program states: “You can defragment your registry next time”. The 1-2 MB is insignificant when we are talking about freeing space up.

We like the overall lightness of the program. The speed of the program is quite fast, but at the same time, remains thorough during scans. The cleaning and optimization processes are swift as well. 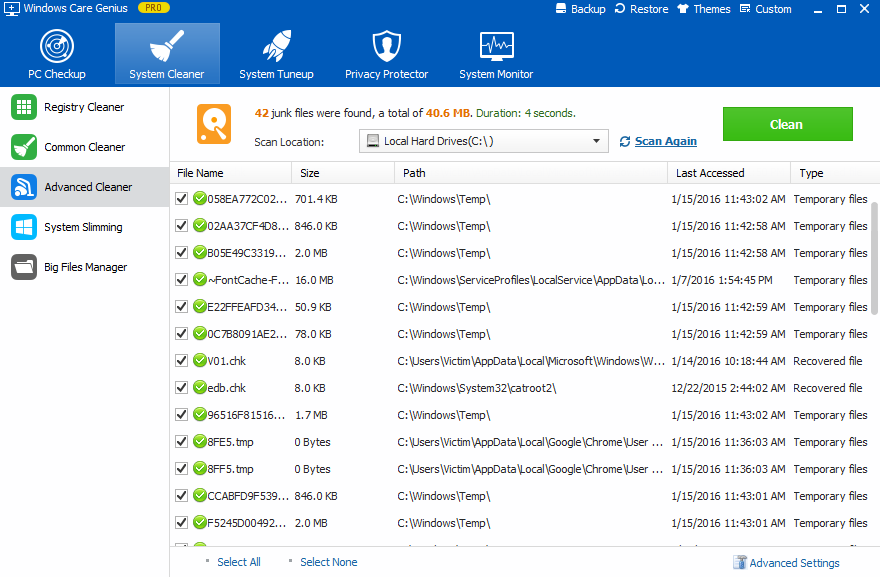 Another thing we fancied about Windows Care Genius is its interface, how easy it is to navigate through it and how accessible it is. Everything is structured and has some description, so even inexperienced users can quickly learn to operate with the program.

The key features of the tool work quite well, as advertised, which is definitely a positive. The Registry Cleaner, as well as the junk files cleaner and Privacy Eraser and System Optimizer are all fast and detailed.

The program even detects current actions of the user, which means that if you don’t want to have “issues” found, you should not click on anything. For example, clicking on the Windows Start button brings 8 results to be fixed in the Registry Cleaner. We are not sure if that is a bit too much and going over the top, but it impressed us.

What Is Missing in Windows Care Genius

What we found missing and think is a feature that should be added is Ignore Lists. It will be good to be able to add a specific registry entry path or a specific file directory to be ignored by the scans of the tool.
In addition to that, there are false positives that need to be addressed, like currently unused registries or such of important programs. You can select which specific things to be left untouched by Windows Care Genius, but not on the PC Checkup Tab. We think that any registry entries made by security software should be left untouched, even currently unused ones.

The File Shredder feature (from the Privacy Protector section) is like a missing one in this version of Windows Care Genius. The feature is not always functioning in Windows 8.1 and not functioning at all in Windows 7. We haven’t tested if professional recovery will get back the files that were shredded successfully.

Sometimes there are pop-up notifications that appear above the taskbar. They can be misleading or inaccurate. For example, the pop-up with the slow boot-up snail on a new and cleaned up computer (with an unclickable Speed Up button on it) or quite the difference about junk file statistics in just a day’s time:

What we also felt missing from the registry backup is speed or a better implementation of it. The full registry backup done by Windows was completed in about 10 minutes and, in comparison, Windows Care Genius did the same backup in approximately 30 to 35 minutes.

Windows Care Genius is what it states to be – a PC Optimizer. It is light, fast and is currently updated on a regular basis. It also features defragging tools in the full version. The interface is easy to navigate. Some features need to be improved, but the key features work well. The program also displays pop-up notifications with advice for optimization, which is an interesting addition.