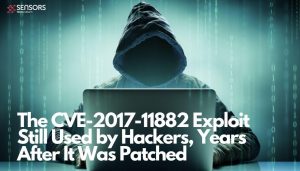 Security researchers say that despite being patched three years ago, the vulnerability is still exploited by various threat groups. In a conversation with ZDNet, Alex Holland, senior malware analyst at HP, pointed out that its popularity “may be due to home users and businesses not updating to newer, patched versions of Office.” We commonly see this vulnerability being exploited by attackers who distribute easily-obtainable remote access trojans,” the researcher added.

In June 2019, we reported on a malware campaign, using emails in European languages to distribute RTF files that carried CVE-2017-11882. The exploit allowed attackers to automatically run malicious code without the need of any user interaction.

It is noteworthy that the flaw has been used in combination with several others in campaigns delivering the CobInt Trojan.

In 2020, it accounted for nearly 87% of all used exploits. This year, another vulnerability is gaining popularity among cybercriminals – CVE-2017-0199.