The Quora Account of Google’s CEO Sundar Pichai Gets Hacked!

The group OurMIne hacks yet another CEO of a juggernaut company. This time, the victim is Google’s Sundar Pichai. He’s the third Silicon Valley executive that was hacked by the group since last month. Facebook creator Mark Zuckerburg and Twitter’s ex-CEO Dick Costolo were the previous high profile hacks of OurMine. 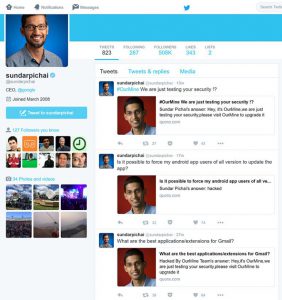 Sundar Pichai’s Quora account was hacked on June 26th. 2016. Unlike their previous hacks, OurMine didn’t breach the victim’s Twitter, though they managed to cross-access it through the hacked Quora account. The group tweeted a few self-promoting messages on Pichai’s Twitter feed. The breach was discovered quickly, and the tweets were removed from Pichai’s profile.

OurMIne’s claim that their goal behind hacking all these social media accounts is to test and promote internet security. It’s still unclear what their real motivations are. They deny selling personal data or passwords, but hacking is hardly the best way to promote cyber-security. OurMine also started offering cyber-security services for pay, allegedly making up to 16,000 dollars in the process. Our advice is to avoid paying any hackers and focus on more reliable methods for cyber-security instead.