Mega data breaches affect all kinds of users, even famous ones like Mark Zuckerberg. Apparently, a hacker from a group dubbed OurMine Team succeeded to take over Zuckerberg’s Twitter and Pinterest accounts, using credentials leaked during the major LinkedIn incident, Arstechnica reports.

According to OurMine Team hackers, Zuckerberg used the same password for his Pinterest, Twitter and LinkedIn accounts, a very weak one indeed – dadada. Facebook’s chairman’s social accounts have been dormant for quite a while, his latest tweet being made in 2012. Moreover, Twitter and Pinterest were able to restore control of the accounts rapidly. Nonetheless, someone succeeded in capturing the rogue social posts made from his accounts before they were removed: 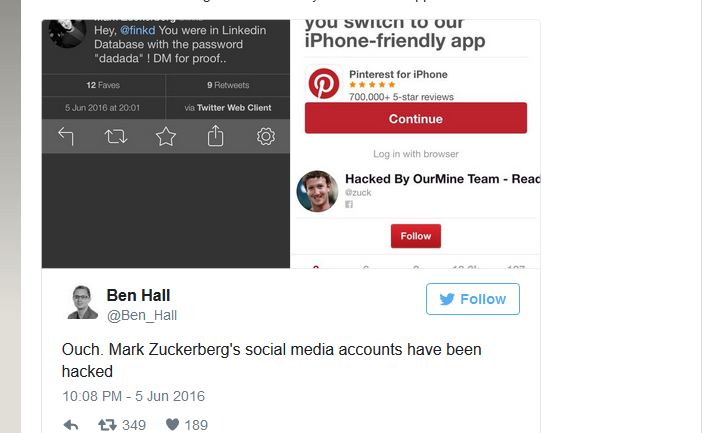 OurMine hack team claims that they were able to access Zuckerberg’s Istagram account. However, Facebook denied the hack, telling VentureBeat that “No Facebook systems or accounts were accessed. The affected accounts have been re-secured”. Furthermore, there is no proof of any damage coming from Zuckerberg’s hacked accounts.

LinkedIn recently warned its users that they need to change their accounts’ passwords immediately, especially the ones used on other platforms. If you haven’t done so yet, don’t waste any time, since it’s very easy for hackers to “cross-reference” usernames and passwords. What is more, LinkedIn is just one of the recent mega breaches that affected MySpace, Fling, Tumblr, and VKontakte.

Recycling the same password is not a healthy security habit and may damage your financial accounts, too. To improve your accounts’ security follow the steps below.

What should I Do to Secure My Passwords?

The average password manager would install itself as a browser plug-in and take care of password capture.

How will it work? When you log in to a secure website (HTTPS), the password manager would offer to save your logins. When you come back to that page, the manager will automatically fill in your credentials, and sometimes web forms. Most password managers offer a browser-toolbar menu of all saved logins to make it easier to log in to saved sites.

However, password managers are applications, and applications can be hacked as well. Nothing is completely secure nowadays. So we get to option 2.

Perhaps the best way to secure your passwords is the most obvious one – change your passwords frequently and use combinations of letters, numbers, symbols, and upper cases. Complex and long passwords make it difficult for attackers to carry out bruteforcing attacks.

Also, if your credentials have been compromised in a data breach, don’t recycle your old password. Make sure to create brand new passwords, following the tips above. You can check your passwords’ strenght via websites such as PasswordMeter.