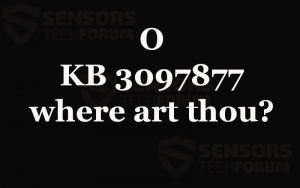 This just in – Microsoft has just re-released the problematic update from MS15-115 KB 3097877. There’s scarce information about the ‘update’ published on Microsoft’s support page under the same patch.

‘This security update was rereleased on November 11, 2015 for Windows 7 and Windows Server 2008 R2 to resolve an issue where crashes occurred in all supported versions of Microsoft Outlook when users were reading certain emails.’

The critical patch in question caused quite the havoc by freezing and crashing Outlook and the Asus DX Xonar driver, blocking network logons, messing up the Windows 7 sidebar, and who knows what else.

We have no idea why Microsoft has decided to re-issue the update under the very same name. Security researchers point out that the ‘duplicate’ can make things more complicated for sys admins.

Users who have enabled the automatic receival of updates will most likely have no troubles with the installation of re-released KB 3097877.

Meanwhile, jump to these two articles to learn more about Nov 10 Patch Tuesday and the original KB 3097877.