Being educated in the 21st century acquires more than having a college or university diploma. We live in an abundance of information, easily accessible and digestible. In the dimension of information technology, education has broadened its initial academic sense. Being educated now acquires recognizing trustworthy sources of information. The rule applies not only to the regular reader (or user) but also to the professional writer. 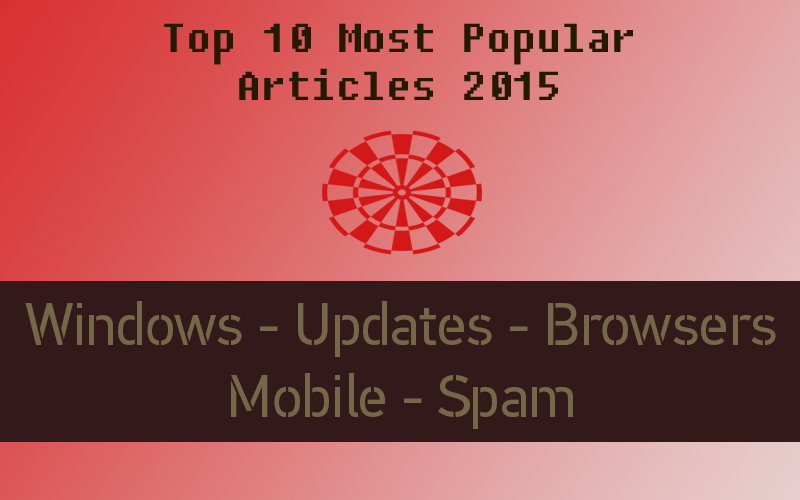 Be True to the Truth

Every news writer will tell you that reporting the news is not as easy as it seems. Doing your best to provide the right stories at the right time is not always enough but it is crucial to our profession. Throughout 2015, we did our best to cover some of the most important security-related stories. Those stories, some good and some bad, helped shape the current state of cyber security. Meanwhile, they also threw light onto the future security landscape.

Top 10 Most Popular Security-Related Articles in 2015

In 2016, we truly hope that the scope of SensorsTechForum’s stories will continue to broaden and reach more readers. We also hope for a cyber space more foolproof and for more stories accenting on progress. In other words, we pray for less cybercrime and more cyber evolution. As for the end of 2015, we are happy to share with you the 10 most popular articles on SensorsTech, based on Google Analytics data for the past twelve months.

Microsoft has recently warned the PC users about certain problems with the SChannel Security Update. It was announced that the SChannel vulnerability contains new TLS ciphers that are causing the problems. The company has offered a workaround, however the users are not recommended to avoid the update or uninstall it if problems occur.

1) Click on the Start Menu and hold the Shift button while pressing the Restart button.
2) Upon restart, you will enter the advanced startup menu. From there you should choose Troubleshoot.
3) You will see the Troubleshoot menu. From this menu you can choose:
-Refresh your PC – this option is excellent since it allows you to keep your files while reverting or replacing windows files so that they can run as new ones. Experts do not recommend this option since sometimes if the system is severely infected by viruses it may lock down the hard drive from the user or bug the hardware detection of the HDD. However, it is a better choice if your PC is clean and you want to keep your files. […]

Article Number 8: Which is the Most Secure Browser for 2015?

We know that nowadays web browsers are represented by several, let’s call them by name, corporations. No matter if we want to admit it or not, corporations have quite the impact on our lives – online and offline. Just for the sake of information sharing, the span of the leading world corporations is more than impressive. Modern life is utterly dependable on multinational enterprises. They provide us with products, services, and jobs. Top public companies are found in all major economy sectors such as oil, insurance, investment, pharmacy, food & beverages, investment, banking.

Article Number 7: How to Protect Your Android or iPhone from Spam

If you’re using the iPhone or iPAD iMessage application, you have probably come across such messages, although for sure Android users have seen their fair share of spam SMS messages as well.
It seems that the iMessage, Android or just regular spam SMS messaging is on the rise at the moment, and its sources are almost impossible to track.
The good news is that the newest Android and iPhones are including better spam-blocking features in their systems already.

Yet another Patch Tuesday (November 10 2015) has rolled out, and the result is 21 new updates, 15 of which are listed as Important and 8 as Recommended. Keep in mind that if you install updates automatically, you may easily end up with patches your system doesn’t really need. Most of the updates are security-related and should be installed. The first update on the list is about fixing issues on Internet Explorer 11.

We were just wondering if some of the latest Windows patches from November 10 would cause issues. Today we ‘woke up’ to the news that one of them – KB 3097877 from MS15-115 bulletin – has brought troubles to Outlook.

If you recently have bought a new computer, chances are that it have arrived with Windows 8 installed in advance. Some of you who are used to work with Windows 7’s interface, show interest in downgrading the operating system. Is this possible? Yes, this is possible and might be a fairly easy process depending on what your PC comes with.

Windows Update KB3022345, or DiagTrack, was released on May 14, 2015. It raised quite the suspicion since it was set to collect sensitive information from machines it was installed on. Even though the data collection was for diagnostics reasons, many users have decided to uninstall the update. Reports indicate that the DiagTrack patch caused lots of SFC (System File Checker) issues.

One of the latest updates released by Microsoft Windows for Windows versions 7 and 8 has raised a red flag in online security communes. Several users have complained and shared experiences through forum posts. Their primary concern is they have encountered issues after installing Windows Update KB3022345 released on May 14, 2015. The update is also known as DiagTrack or Diagnostics Tracking Service.

Article Number 1: Which Is the Most Secure Browser for 2014?

Each of the three most popular browsers (Explorer, Firefox, Chrome) has its uniqueness and special appeal. For example, Chrome uses modern technologies including instant loading of the search page and voice response. The Internet Explorer uses graphics hardware acceleration, works on 64-bit program and implies a very powerful tracking protection against the site code. At the same time, Firefox has special extensions that allow the user to customize it according to one’s own needs.