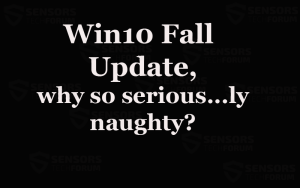 Windows 10 version 1511 is finally here. Also referred to as Fall Update and Treshold 2, the Windows-as-a-service upgrade has been seen to cause some issues (no surprises here, really). Users have already shared their complaints on Microsoft answers and social spots such as Reddit.

The first thing to keep in mind is that the Windows 10 1511 version initiates a download process of about 3GB files. The installation itself can take at least half an hour or longer.

Problems Emerged from the Upgrade to Windows 10 Fall Update

Оne of the problems reported on Microsoft answers is the following:

Microsoft support engineers have given the following explanation:

We’ve observed that some devices that have an SD bus with an SD card inserted while installing the Windows 10 November update will stop responding at 44%, and we are currently investigating the issue.
If your install is freezing at 44%, check if you have an SD card inserted and remove it, and the update should be able to progress beyond this spot. If you needed the SD card for additional disk space, see if you have a USB/Mini-USB port available that you can use instead for the upgrade. Otherwise, you may have to try freeing up some disk space off the hard drive.

In response to the comment above, another user has shared that:

The insanity is aggravated by keeping finding and installing other updates that… had already been installed! In my case, Update for Windows 10 for x64-based Systems (KB3106246) was Successfully installed on 11/12/2015… four times! Meanwhile, Update for Windows 10 for x64-based Systems (KB3081704) Failed to install on 11/12/2015… four times!
It seems like the problems with Windows updates won’t stop. As of the time this article is being written, the topic is 12 pages. You can join and follow the conversation, and hope that you will receive an appropriate answer from someone at Microsoft.

To no one’s surprise, a thread has emerged on Reddit as well:

So I just did the new “Fall” update and once my pc started back up windows automatically removed CPU-Z which I had to re-download and install and it works fine so no reason for it to have removed it..
It also decided to take it upon itself to remove my Gadget’s from 8gadgetpack again I had to re-install and now my PC meter software you run with the Gadget bar to see temperatures / clock speeds windows pls..

To restore your applications, go to System > Default Apps and re-select them.

Another important thing to note concerns the downgrade from version 1511 to the RTM one. In case a user has uninstalled the November update, he won’t be able to install it from Windows Update. Alternately, the user will have to go to the Microsoft software download page, and select the Upgrade now to get the Win10 1511 version that contains the November update.

Lastly, take a deep breath and join the waiting line, as Microsoft says that…

If it’s been less than 31 days since you upgraded to Windows 10, you won’t get the November update right away; this will allow you to go back to your previous version of Windows if you choose. After the 31 days have passed, your PC will automatically download the November update.