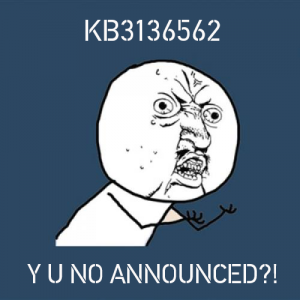 Oddly enough, there is no official KB3136562 knowledge base (KB) article available.

Despite that Microsoft has given zero official information on KB3136562, Win10 users say the update is a fact.

Apparently, the two download links actually work. Win10 Threshold 2 customers have installed the update successfully. This is how they discovered what the update was actually about – it ‘upgrades’ the Windows version to build 10586.79. Even if the KB3136562 update works just fine and causes no issues, it’s very bizarre, to say the least, that Microsoft has pushed it in such a veiled manner.

We would advise Win10 version 1511 users who see the update not to install it. Even though it’s available on https://download.windowsupdate.com/, the lack of any KB-related information is disturbing. An unannounced update should be regarded as no update. If you install KB3136562, there is no telling what will happen next.

So don’t be in a hurry and wait for Microsoft to explain. Laughing out loud.