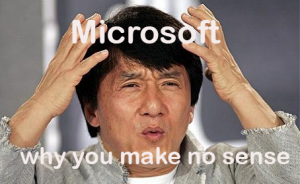 You would think that a corporate giant such as Microsoft would deal with an ongoing issue in a gallant and user-friendly way. However, lately things appear to be more chaotic than gallant over at MS headquarters. And we have one more proof to support that statement.

In fact, some users may have been through the situation we are about to describe.

Fall Update No Longer Available via the Media Creation Tool

Earlier this month MS released Win10 version 1511, also known as the Fall Update and Threshold 2. MS then updated the installation files via a free, ready-to-download media creation tool or MCT. MS also endorsed the MCT to Win10 users who wanted to upgrade immediately instead of wait for the update to arrive through Windows Update.

Nonetheless, yesterday morning it became clear that what was known about the upgrade process to Threshold 2 doesn’t apply anymore. Although the initial upgrade functioned as it was supposed to, things have changed during the last weekend without much ado. In other words, the upgrade files were pulled and the page aimed at installing the Win10 version 1511 now downloads the 10240 build from July.

The Official Statement by Microsoft Doesn’t Explain Much

A MS spokesperson has given a statement confirming that:

There are some speculations as to why that change happened. However, nothing is confirmed yet. It’s still very odd that MS has done that alteration since millions of users already had the setup files.

Despite there’s been no official explanation by MS, there’s one pretty good interpretation. The 1511 direct installer has (most likely) been installing the Windows 10 Home edition on computers that are certified for Windows 10 Pro. Rather than dealing with the problem, MS directly pulled it down, so to speak.

Version 1511 Already Reported to Be Buggy

Security researchers have pointed out that the clean installations of build 1511 are not exactly suitable with Microsoft’s BitLocker tool. Moreover, BitLocker itself appeared to be vulnerable as a research revealed the tool’s encryption can easily be bypassed on enterprise machines.

Generally, some Win10 users have shared that the OS isn’t as shiny as advertised and has some flaws. Some of the reported troubles, outlined by ArsTechnica, include:

Computers that instantly wake after sleeping, excessive processor usage by the Mail application, the lock screen failing to hide the full desktop, etc.