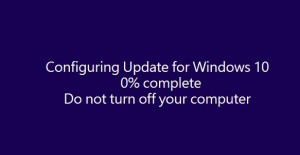 Cumulative updates can be quite problematic for quite a lot Windows 10 users. However, Microsoft usually is not in a hurry to present a quick fix for such issues, and users are left to deal with them alone or with the help of independent experts.

Official Description: This update includes improvements to enhance the functionality of Windows 10 Version 1511.

The latest cumulative update – KB3124262 – has joined the pile of tricky Windows updates. The freshly enrolled update has entered yet another loop of endless-ness. Users have reported KB3124262 being offered to them over and over again. The update will keep on showing, unless they hide the patch manually.

Here is what Wilwave user says about the update:

The two most recent Cumulative Updates for Windows 10 Version 1511 for x64 System KB3124262 and KB3124263 have downloaded Ok but on Restart they have each frozen my computer at 30%. After waiting for an hour or so I forced a reboot on both occasions. Computer then rebooted Ok, but both Cumulative updates still sit in Windows Update awaiting a restart, even though the computer has been restarted many times.

Wilwave’s claim is supported by other Win10 users’ who have been through the very same issues. In addition, similar problems have happened before, and as it seems, they will re-occur.

Unfortunately, an official fix is still being awaited. So, take a deep breath and suppress the desire to roll back to a previous version of Windows.

Or you can try a solution proposed by Sachin Venkatesh, a Microsoft Support engineer:

Method 1: Perform a SFC scan (System file checker) scan.
How to use the System File Checker tool: https://support.microsoft.com/kb/929833
Method 2: Run the DISM tool and check if it helps.