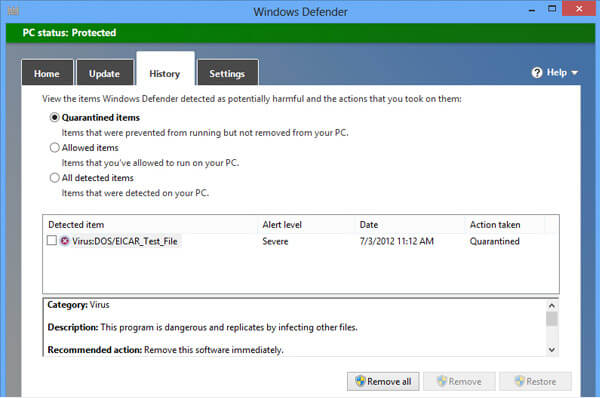 Kaspersky recently filed anti-trust complaints against Microsoft with the European Commission and the German Federal Cartel Office. The anti-virus company did the same in the end of 2016 with Russia’s Federal Antimonopoly Service. As to why, Kaspersky believes that Microsoft is relying on unfair means to force users to use Windows Defender, the default protection in Windows 10. And as it turns out, Microsoft has admitted that Windows 10 truly disables some of the third-party AV apps out there. The reason for this, however, is not competition but compatibility.

According to Rob Lefferts, director of security in the Windows and Devices group, “Microsoft’s application compatibility teams found that roughly 95 per cent of Windows 10 PCs had an antivirus application installed that was already compatible with Windows 10 Creators Update,” but:

For the small number of applications that still needed updating, we built a feature just for AV apps that would prompt the customer to install a new version of their AV app right after the update completed. To do this, we first temporarily disabled some parts of the AV software when the update began.

As claimed by Lefferts, Windows Defender doesn’t have anything against third-party security programs running on the system. In case the third-party code expires or is out-of-date, Defender will take charge. In addition, the program is not designed to run a scan on a system without the user’s knowledge or permission, Microsoft says.

Microsoft is also working with third-party security software providers to guarantee compatibility is in place. Kaspersky has previously accused the company that it shortened compatibility testing times from two months to six days.

Is Microsoft Repeating Its Internet Explorer Approach with Windows Defender?

As the Reg puts it, the antitrust case against Microsoft is built on the same logic that was used years ago with browsers. Microsoft’s CEO back in the days, Bill Gates, believed that the Internet was just a trend and didn’t do much about browsers. Then, the company locked Internet Explorer into Windows to compensate on the losses and even though this decision had its price, Netscape was still taken down.

Obviously, Kaspersky suspects Microsoft is using the same tactic with Defender but the company has decided to fight back these antitrust claims. On the other hand, according to Lefferts’ statement, “Microsoft has actively engaged for more than 20 years with our antivirus ecosystem partners around the world to protect Windows users in the face of evolving cyber threats. We look forward to continued collaboration with these partners toward our mutual goal of protecting customers“.