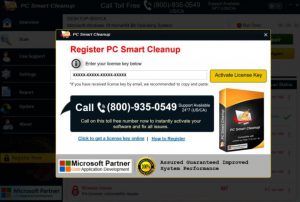 This article aims to help you remove PC Smart Cleanup fake PC cleaner program completely and effectively from your computer.

A fake PC optimizing software has recently been detected to be pushed onto the computers of victims and use fake scanning and detection in order to deceive you into thinking you have issues and also viruses on your computer. The program, called PC Smart Cleanup then asks you to either activate it via purchasing a very expensive license key or to call the number (800)-935-0549 in order to activate it and remove malware that does not exist. If you see pop-ups and fake detections by PC Smart Cleanup on your computer it is strongly recommended to read this article and learn how to remove it completely from your computer.

PC Smart Cleanup – How Does It Spread

The primary method used to spread PC Smart Cleaner is most likely via adware programs and fake error web pages, whose goal is to deceive you into downloading the software in order to remove a virus on your computer. The web pages which “advertise” the fake software present the following messages to victims via a fake Microsoft web page:

The messages can also appear on mobile phones and instead of the software, a fake tech support number has been added. They can also be seen on iPhones and MacBooks and these fake errors can appear as a result of visting a suspicious website or if your computer has already been compromised by viruses. Here is how the fake detection web pages look like: 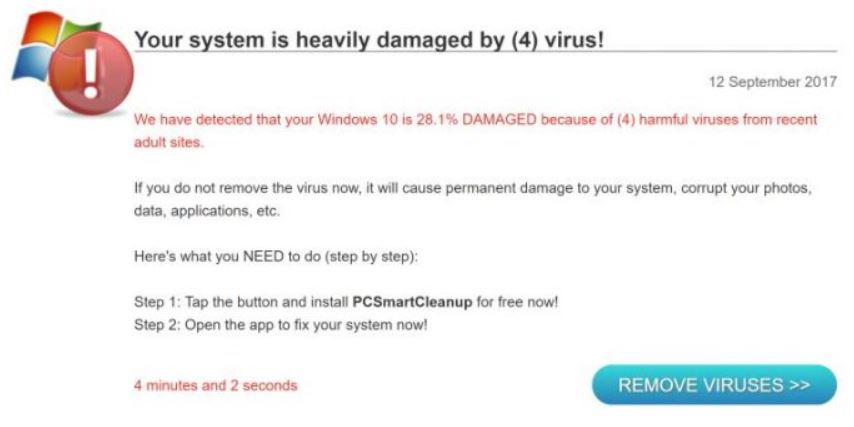 Another method by which you could end up having PC Smart Cleanup on your computer is if you have previously installed ad-supported programs that may have automatically downloaded and installed this software in the background.

As soon as it has been installed on your computer, the program modifies registry entries in the Windows Registry Editor. The sub-keys attacked by it are reported to be the Run and Run once registry sub-keys. After this has occurred, PC Smart Cleanup may also cause your computer to misbehave by slowing it down significantly and modifying it’s settings.

Then, PC Smart Cleanup may automatically run on Windows startup only to display a fake scanning message that pretends to detect issues on your computer: 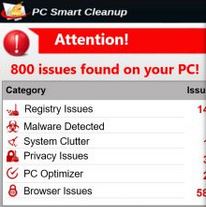 Then, the program displays a screen asking to call a tech support number for activation of the software or to directly buy the license for PC Smart Cleanup online: 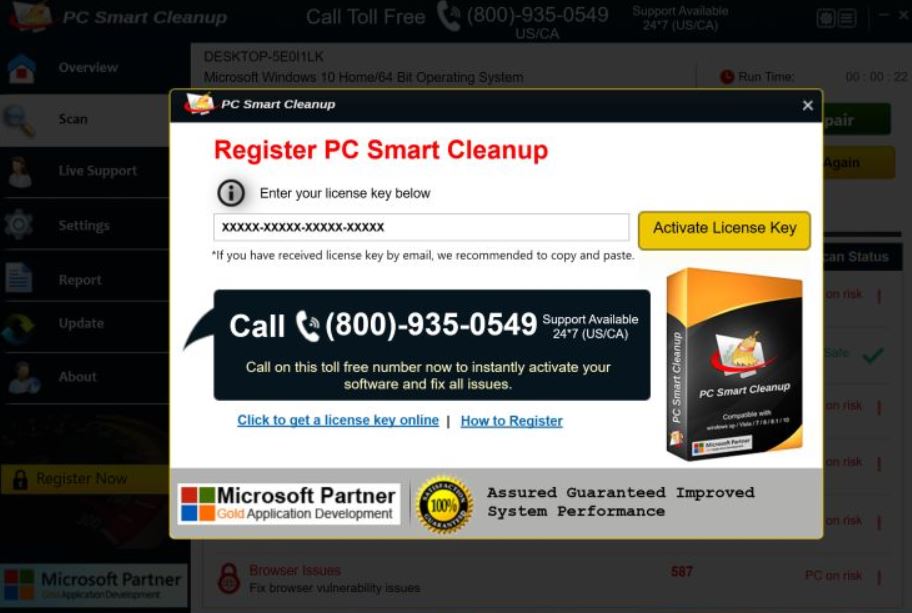 To increase trust in the victims of this fake program, it has added a fake certificate and images that it is an official Microsoft Gold™ partner. However, there is no such thing and PC Smart Cleanup should not be trusted, because all it wants is either your money or your financial information when you conduct the online purchase.

For the removal of this suspicious software, it is highly recommended to follow the instructions below. They are specifically designed to help you fully erase all of the files that are created by this software. However, since manual removal may be tricky, because this software may reappear after the files are deleted, security experts recommend to remove it by downloading an advanced anti-malware software, which will automatically and protect your PC in the future as well.