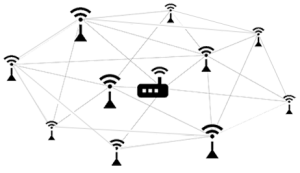 In case you have to deal with a large area, like a big apartment or a house and the signal is often not strong enough, one solution is to use Wi-Fi extenders, or repeaters. Yes, this solution works, but the signal may still not be enough in some areas and interference might occur, since extenders cover only the range they are plugged in. This is why there is a new, evolved solution for spreading wireless signal across networks that has become very popular – mesh Wi-Fi devices.

The Mesh systems of Wi-Fi devices, have multiple repeater-like devices that are specifically designed to interconnect with each other and spread the Wi-Fi effectively, without signal loss or interference.

Similar to extenders, they repeat the network signal, but they are way easier to set up. However these repeaters are interconnected and they can be controlled very easily – via a smartphone app. One instance of devices is reported to have such an app and this app can perform a variety of modifications too, such as changing the network frequency from 2.4 GHZ to the less busy but less rangy 5 GHZ.

The first company to start producing such systems for home and has skyrocketed in popularity since then is Eero, but it was also followed by many other big producers in this market, like Linksys, for example.

What is interesting about the mesh system is that It does not just repeat the wi-fi signal – it is much smarter than that. The devices not only correspond between each other to bring a stable connection but they can also have the ability to create a separate network. This network is decentralized, meaning that the devices communicate with each other, instead of with the router.

To better explain how they work, imagine that you have a warehouse and you have 4 mesh networks. If you set them on each corner of the warehouse, they will all be connected, because each device connects and captures the signal from the other device. The only requirement is to keep one device close to the router.

But do not disregard Wi-Fi extenders too. If you have a big apartment for example, mesh devices may be unnecessary, since they are very expensive (around $400 dollars for 3 devices). Your better option in this case is if you use a Wi-Fi extender instead.