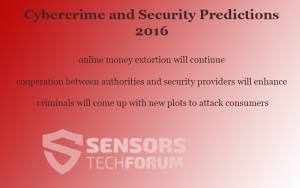 Every business field needs its predictions, and IT security doesn’t make an exception. We are already starting to read forecasts about what to expect in 2016. And to be honest, what we read is mostly bad stuff. Cybercrime will not get any easier to fight. Methods employed by hackers will continue to evolve and trick both users and enterprises into becoming preys.

However, governments and security authorities will also become more active and responsive to cyber attacks.

Well, at least that’s what experts at Trend Micro are expecting to happen. They believe that cooperation between security firms, INTERPOL and the Cyber Defense Institute will be blooming in 2016. The ground for such partnership is being fertilized as we speak – several high level hackers have been arrested in 2015.

Dimitry Belorossov a.k.a. Rainerfox of the sinister CITADEL malware is already caught. He was recently sentenced to 4 years and 6 months jail time. He pleaded guilty for conspiring to commit computer fraud.

What was his crime? Rainerfox infected more than 11 million PCs with the Citadel sophisticated malware. To do that, he used a range of intrusion methods and thus created an enormous botnet. Citadel is a sophisticated Trojan horse, designed to steal personal information, including banking and financial data. The malware was based on the Zeus source code.

Another Russian national was also recently imprisoned, after pleading guilty for hacking major corporate networks. In fact, this guy compromised more than 160 million credit card numbers. His hack is now referred as ‘the largest known data breach scheme to be investigated in the United States’… So far.

These two arrests, among others, can be called a milestone in the efforts of authorities to break some of the strongest branches of cybercrime – botnets and trading with PII (personally identifiable information).

Experts are also awaiting a stronger communication against cyber criminals on a global level – between major regions such as the United States and Europe. To support these efforts, an Umbrella Agreement was recently signed by the European Union and the USA. The agreement will allow the two sides to exchange valuable information during criminal investigations.

We are witnessing various advancements in current technologies for users. However, crimeware is also evolving. We are most definitely going to see new attack plots and even more sinister methods to extort money from users.

Perhaps, Cryptowall 4.0 is baking in the oven as we speak?

After all, predictions are not only fun to read – they should serve as precautions.

Here’s a resume of what’s expected in the forthcoming 12 months: