Intel has officially released the details surrounding its long-anticipated 8th generation core chips that are bound to turn thin laptops into quad-core powerhouses.

Not very often do you get Intel to announce the launching of a new Kaby Lake R core chip on the scale and magnitude as this one. The company claims the new processors will be up to 40 percent faster compared to their 7th generation CPUs. It is, of course, big deal, arguably the biggest leap in CPU technology in a decade. Compared to previous generational upgrades, the new 8th generation CPUs are bound to be the greatest leap between generational upgrades in the past five years.

The peculiar thing about the new generation of Intel’s CPUs is that this one utilizes four main cores instead of two. All four cores are 15-watt 8th-generation Core U-Series chips. All four U-series chips including the four cores contain eight threads, essentially the part that makes the 40 percent increase of processing speed possible. Intel has also revealed how slow each core will be as well. Slowest one being Core i5-8259U, running at 1.6GHz, boosted with a clock it can reach up to 3.4GHz; and on the other side of the spectrum, the fastest Core i7-8650U will be running at a minimum of 1.9GHz, utilizing a boost clock its speed can go up to 4.2GHz. On the other hand, the processors are all part of Intel’s U-Series, which is the series for Intel’s mainstream laptop chips.

Apart from the doubling of the cores, the new 8th-generation CPU remain pretty much intact with the previous generation. Maximum processors speeds remain high, the chips still fit within a 15-watt thermal design power as well as keeping the UHD 620 graphics. Theoretically speaking, the 15-watt thermal design power will allow for the new generation processors to fit into the same designs as the 7th-generation dual core CPUs. Quad-core processors are not all that rare in laptops. Large and powerful laptop in the likes of Razer Blade and Dell XPS 15 have both utilized quad-core processors.

Perhaps what is more intriguing is that these 8th-generation CPUs will not be the upcoming Coffee Lake, as it was widely expected by experts and enthusiasts. However, Intel does characterize its new U-series chips as a “Kaby Lake refresh,” effectively categorizing the current Kaby Lake chips as “prior generation” parts. Another interesting piece of information to take into consideration is that both Coffee Lake and the upcoming 10-nm Cannon Lake chips will all in all both be a part of Intel’s 8th-generation Core branding. In short, the new 8th –generation core chips will include three separate chip architectures as well as two process technologies, meaning these changes will be sold under a continuous single brand name. 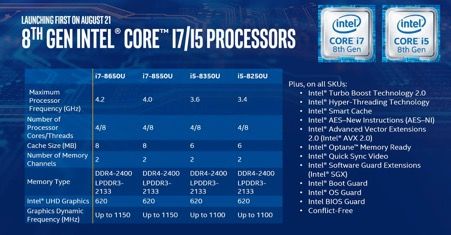 Per Karen Regis, director of mobile platform marketing for Intel, the company would have increased the speed of their processors by 25 percent in regards to generation-to-generation boost with the new 8th-generation, solely by doubling the number of cores. On the other hand, rivals AMD have not revealed the full specifications for their mobile “Raven Bridge” chips and their low-power Ryzen 3 chips use four cores and four threads accordingly compared to the performance advantage of using eight threads touted by the new Intel 8th-generation CPUs.

Intel purposefully demonstrated the power and capabilities of its new CPU in a hypothetical measure of performance. The new U-series chips will be able to create a 4K video in three minutes on PowerDirector Ultra HD (HEVC), that is to say, the new processor will be 14.5 times faster than Intel’s 5th-generation i5 Ivy Bridge Core PC. Intel has provided sufficient information in regards to its new U-series chips. A spokesperson for Intel stated that the new chips would be using Intel’s Turbo Boost Max Technology 3.0, meaning that instead of boosting just the one core to its maximum capability, two cores will be boosted to their maximum rate. Compared to 7th-generation Kaby Lake parts the newly developed chips will be 28 percent faster in Adobe Lightroom – twice as fast a 5-year-old computer. 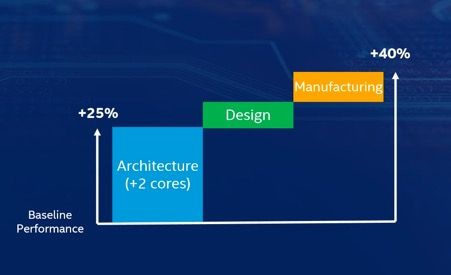 There is no doubt that the most significant selling point of the new Kaby Lake R will be its nearly doubled performance measures. Hardware-based 4K HEVC encoding and decoding at 10-bit depths or VP9 will be easily achievable with the new U-series chips. It is the Kaby Lakes R’s new video engine that will be most praised and fancied as Intel has outlined with on-demand streaming services like Netflix, Amazon, and Vudu being some of the main propagators of 4K modernization and support.

Related Story: No Windows 7 and 8.1 Updates for New Intel and AMD Processors

Intel’s Software Guard Extensions will also be included with the Kaby Lake R chip. PowerDVD has stated that the SGX software player was their only available option for users to enjoy UltraHD Blu-rays. This will be great news for many as it will allow more 4K premium content from services and enjoyed by more people. Intel is expecting more than 90 percent of 8th-generation computer devices to be SGX viable and working successfully. Another great feature of the new Kaby Lake R chips is that users will be able to experience more battery life of around 10 hours, or in other words, almost 12 hours of playing back YouTube until your battery is fully drained.

Gamers will inevitably see improvement too. Having been confined within the limited capabilities of the previous 7th-generation CPUs, gamers will now be able to experience more freedom in their gaming adventures. The new chips will be implementing Intel’s Optane, which is being marketed as a technology which will give hard drives SSD-like performance in addition to Thunderbolt. Individuals who make use of Thunderbolt will be able to expand their experience with new graphics dock hitting the market soon. Graphic docks on their part allow external graphics cards to be also used with ultrabooks and other computer devices that are unable to fit them in. Acer and Microsoft may also relish the launch of the new Kabe Lake R cores with Intel has stated that their 8th-generation chips will have enough powers to support the Acer and Microsoft’s new mixed-reality solutions.