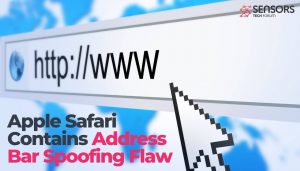 Your Apple Safari browser may be affected by address bar spoofing flaw, security researchers say. As a result of it, you may be targeted by spear-phishing attacks and malware.

Where does the address bar spoofing flaw reside?

Originally discovered in Safari for both iOS and Mac, the flaw “occurs due to Safari preserving address bar of the URL when requested over an arbitrary port,” as Baloch explained. The issue is caused by using malicious executable JavaScript code on a random website. The code makes the browser update the address while the page loads to another address chosen by the attackers.

Rafay also says that the address bar spoofing flaw is more effective in Safari by default, as the browser doesn’t reveal the port number in the URL “unless and until focus is set via cursor.”

In other words, threat actors can arrange a malicious website and trick the victim into opening the link sent in a spoofed email or text message. This action would take the potential victim to malware or would steal their credentials.

It is also noteworthy that Safari on macOS is also vulnerable to this flaw. Fortunately, the bug was fixed in a Big Sur macOS update last week.

This is not the first time Rafay Baloch discovers address bar spoofing flaws in popular browsers. In 2018, the researcher reported that both Microsoft Edge and Safari contained an address bar spoofing vulnerability. The statement was made after he tested the browsers with proof-of-concept JavaScript code.

The tests indicated that upon a non-existent port request, a race condition was triggered in the memory process allowing malicious code to spoof the address. Following the report, a security advisory was assigned, and the two companies were notified. The issue was tracked in CVE-2018-8383 advisory.