Bing(.)vc is a well-known browser hijacker that has been around for a while now. The latest version of the hijacker, however, has been reported to spread via legitimate-like applications. To blame for this is the infamous method of bundling.

Intel and McAfee security researchers have discovered that the Bing(.)vc malware is now bundled with apps by Lavians Inc. This is what the report says:

We have come across several files from Lavians Inc. that look like legitimate applications but may pose a serious risk. We have observed that Lavians Inc. is repackaging clean applications with a browser hijacker to avoid suspicion and to increase its outreach.

According to Intel, most of the infected files are hidden as driver utilities and have names like:

Upon installation of the files, the user installs the particular app but also gets his browser hijacked with bing(.)vc. The hijacker is hidden inside a file identified as IconOverlayEx(.)dll.

Once into a system, the hijacker installs itself into Chrome, Firefox, and IE, and changes the browser’s homepage. Additionally, ads will be injected into all websites the user visits.

Despite its name, the page, bing(.)vc doesn’t have anything to do with Microsoft’s Bing search engine. Researchers point out that it’s weird Microsoft hasn’t done anything to take the domain down. The most curious part of this new campaign, however, is that it redirects users to a page that sells a very expensive tool to fix the victim’s browser.

Unfortunately, users have shared negative experience in their attempt to clean their browsers and systems. Even though they have successfully removed the driver utility which brought the hijacker, the hijacker itself persists. One file that remains after the uninstallation of the app is indeed IconOverlayEx(.)dll.

Furthermore, Bing(.) would also modify the victim’s registry by adding two new entries to load the DLL on every restart of the system:

The only way to remove the malicious file is by manually removing the registry keys mentioned above, or, if the user is inexperienced, run an automatic tool that offers this service. Besides doing that, users should do as shown in the image below – the affected browsers’ shortcuts need to be fixed by deleting the URL at the end of the app target parameter. 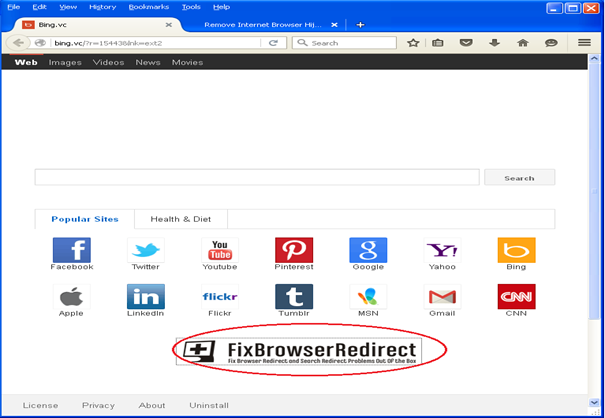 Also, make sure to get to know the basics of the pay-per-install affiliate business responsible for many of the bundled downloads currently spreading malware and adware.