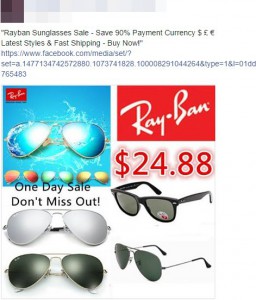 Facebook is often used by online crooks to fulfill their eager-for-quick-profit goals. Scams spread via Facebook are something users witness on a daily basis and are usually unaware of, until they notice someone has taken over their account.

Update April 2018! New version of the RayBan virus on Facebook has been detected. Read more on this web link.

Unfortunately, such scams are a more of a regularity rather than a rarity, and continue to affect thousands of users’ social media accounts.

We have already written a bunch of articles featuring information on current Facebook-related scams.

Make sure to check them out and prevent them from affecting your account:

Typically, Facebook ‘viruses’ (as users usually refer to any fraudulent online activity) involve a video or a picture, or a thumbnail of a viral video. The idea is to lure the user into clicking it. One way to know that your Facebook account has been affected is if you see posts that appear to be shared by you, but in actuality shared by somebody else. A crook.

Cyber crooks are constantly re-inventing social engineering. One of the latest scams was recently reported over at Reddit by a user named DivineAusir.

Here’s what the user says:

Hi, I got a facebook virus that posted photos of Ray Ban sunglasses and tagged a bunch of my friends in them. I’m not sure what caused it but two things happened the day the pictures were posted. The first thing was that I got a notification that somebody accessed my facebook account. I was in school at the time and so I didn’t do anything about it. Second thing was that I got an email that seemed completely legit but when I clicked it, it took me to a suspicious site which I closed immediately.

Unfortunately, phishing scams like the one that has affected DivineAusir’s computer affect mobile devices as well. If you have detected fraudulent activity on your Facebook account, be it on your PC or your mobile, it’s highly recommended to take actions immediately. The very first thing to do is change your Facebook password.

The bad news is that this countermeasure (changing your password) wouldn’t work if the scam is triggered by malware. Keep in mind that a keylogger may have captured your password and shared it with cyber criminals. A keylogger in your system usually serves as an indication of a Trojan infiltration, just like in the case of Remtasu spyware spread via a Facebook hack tool. If your system is unprotected, a Trojan horse may easily have sneaked in. Depending on what cyber crooks are aiming at, Trojan horse infections vary.

But let’s not get ahead of ourselves. Even if you have been affected by a Facebook ‘virus’, you shouldn’t worry that much if you haven’t actually interacted with the promoted content. Phishing and social engineering require user interaction. To activate the scam, you are acquired to click on the image.

Once you have clicked it, you will be redirected to a specially crafted website employed for phishing. In the case of Reddit’s user DivineAusir, the name of RayBan was used to make the scam believable. Even if you land on a page that looks a lot like an official Rayban distributor, don’t be fooled. It’s just crooks trying to get to you.

Scams that take over Facebook accounts are known as Facebook Manual Share Web Attacks, as reported by Phishlist. They would spread images and messages on behalf of the user, and would tag a large amount of other users.