KB4576754, or Yet Another Update Pushing Edge to Windows Users 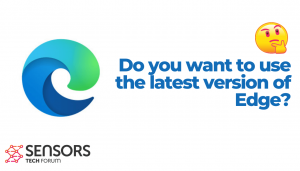 Microsoft is not giving up on pushing its Edge browser to Windows users, and another mandatory update proves that.

Despite adopting the Chromium engine, the company doesn’t want you to use Chrome or any other browser, and just released a new Chromium-based version of Edge in the KB4576754 update.

According to the official advisory, “this new version provides best in class compatibility with extensions and websites“. This version also provides great support for the latest rendering capabilities, modern web applications, and powerful developer tools across all supported OS platforms, the company promises.

In truth, the KB4576754 update forces the installation of the latest Edge version, and removes the previous one. However, since the update is mandatory, Windows users should take special actions to avoid using the browser. Note that the update is made for certain Windows 10 versions – 1809, 1903, 1909 and 2004, but it was also released for Windows 10 version 1803 in the form of KB4576753. However, it is not aimed at Windows Update for Business (WUfB) managed devices.

Features of your current version of Edge will be migrated to the new one, including start menu pins, tiles, shortcuts, taskbar pins, etc. In addition, the latest version will be pinned to the taskbar. Other changes include:

It turns out that there is a way to remove the update even if it was already installed on your device. You just need to use the Command Prompt to run the following two commands:

Last month (August 2020), Microsoft Defender, the security suite which guards the Windows operating system received an important update which prevents software and programs to disable it via the Windows Registry. This functionality was often misused by malware operators in attacks against Windows.