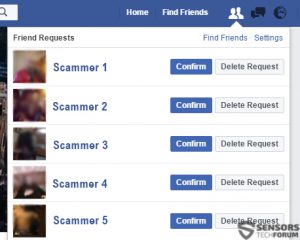 A new scam on Facebook has reappeared – account cloning. It has been spotted in 2012 and now users have posted complaints that the scam is back again. The scam has already affected some people and scammers have obtained money using fraudulent practices.

A Fox News insider report has indicated that this Facebook scam is primarily associated with Facebook account cloning. First, the criminals may use a fake profile of someone who the user is likely to add(like a beautiful woman) to see more details about the account the friends list of the account as well. What the then scammers do is that they completely copy the targeted profile to the slightest detail so that it becomes identical.

One of the consequences of adding such a fake user account is that the account may send you malicious web links that may infect your computer with very dangerous malware, like Infostealer Trojans, Rootkits and even Ransomware Virus. Such ransom viruses usually encrypt the files on the compromised computer and ask the victim for money to get them back in the form of BitCoin.

Another consequence which has been reported by affected users is that the cyber-scammers were sending out messages related to requests for immediate payments. For example, the cyber-criminal may write to you from the fake profile that he was involved in an accident and needs several thousand dollars to pay his bail and other charges. The scammers may also ask the user to call fake numbers or subscribe his device to SMS fraud services which can result in an unexpectedly large phone bill.

There are also other dangers associated with fake user accounts, like:

The scam has primarily been reported to affect countries in the United States and Central Europe as well, like Netherlands for example. Users who see friend requests from someone who is already in their friends’ list should immediately check in with the original Facebook user of the account. If there is a scam going on, it is strongly advisable to notify all of the users in the friends list of the compromised account via a shared message or a status update or any other means.

To protect yourself completely from such scam, we advise you to:

The bottom line is that Facebook scams may never stop appearing because they usually tend to work. It is a fact that for a while now, this has been the biggest social network on the planet Earth and its users are subjects to numerous scams and malware attacks worldwide.