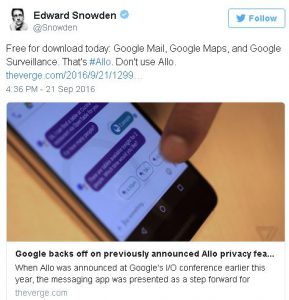 “Do not use the new Google Allo”, “ Google Allo invades your privacy” and other statements have begun to raise the eyebrows of many privacy activists and researchers. The primary concern is that the new chat bot created by Google which can help users make plans and discover different information also retains the chat logs and may be used to improve Google services and hence invade user privacy as well. Many feel divided about the new service and we have decided to shed more light on how Google Allo exactly operates.

Several primary facts concern research experts. One of them is something that is done as a result of Google’s privacy policies – the connection with the app is not encrypted. It does not take an advanced knowledge to know that this is an immediate security threat, because it is also a lucrative opportunity for hackers to listen in on what your plans for the weekend are, if they have interest in this, hypothetically.

This has been done primarily because Google may want to use this tool to expand the learning algorithms that help them develop themselves in the artificial intelligence field. This is surely beneficial for Google, because they will improve automatic response and other services but it resembles a double-bladed knife, because it may involve the invasion of privacy as well.

Furthermore, security intelligence expert and ex-NSA Edward Snowden has also tweeted that the new Google Allo app may act as a gateway to police forces and governments and may send every message it has recorded on government request.

Not only this, but in addition to it, news broke out that Google will retain messages transferred in it’s Allo app which does indeed raise some very interesting questions. It has been reported that the communication between the device and Google’s servers will itself have encryption but Google themselves may have access to the chat logs in unencrypted format.

Furthermore, reports also indicate that similar to Gmail and other Google services, this service may provide support to law enforcement. This is very contrary to the previous statements by legal officers of Google that the corporation is not obliged to provide law enforcement with information as a result of being presented solely with subpoenas. Since this data is aggregated, Google does not only improve it’s automated machine response system quickly, but the company also may avoid scandalous suits, such as the situation with Farook’s Apple iPhone being locked.

Overall and all user privacy is nothing new to Google and they have previously retained information as well. However, this app is a new way of knowing what exactly an individual is not only doing, but is also planning to do in a given day. This should really make us think on the term user privacy and what changes it has been through as a result of the dynamic environment of the 21st century.