Developed by the Swedish company OVPN Integritet AB, this is one of the best VPN services out there. Several benefits put it ahead of the competition, such as advanced encryption, self-hosted SSL certificate, SSL server with an excellent rating and very little tracking. We have decided to test this software and see what it can offer to the user.

VPN has become one of the most secure ways to browse the web and communicate via it. A lot of companies have begun implementing custom VPN channels in-between their different offices globally to prevent sensitive e-mails and inside information from leaking out. And a similar level of security is now available for the user provided by companies such as oVPN.

For starters, the software uses several types of encryption:

AES-256
The 256-bit strength of AES is regarded to be one of the top algorithms. It uses a variety of keys, digits, and symbols as a combination in its cipher. The cipher has been categorized by the NSA as a Suite.B.

DH-2048
The 2048 bit DH (Diffie-Hellman) encryption algorithm is primarily used where VPN is being utilized. It is mainly focused on communication encryption. Its downside is that it can be compromised if a man in the middle type of attack is commenced. This is why all systems using the same VPN network with a DH-2048 VPN service should be additionally secured, just in case. It Is very unlikely that such attack may occur, but one can never have too much security, right?

There is also another version of oVPN available on the domain oVPN.to which uses RSA-4096 in addition to those two algorithms.

In addition to those ciphers being used, the software also provides several other extras in its full version:

VPN auto kill-switch
This neat security feature significantly maximizes the security of your connection by automatically disconnecting from the web when the VPN connection has been disabled. This stand-alone management of the network of the device stops it from being unsecured.

DNS leaks prevention
Every time your system is connected via a VPN network, its usual behavior is to keep its original DNS. However, in some special cases, packets can leak outside. This type of threat is considered to be serious because while using a VPN service the user feels secured and this is a good opportunity for a cyber-criminals.

DNScrypt
This type of security measure is oriented towards encrypting the DNS traffic that is passing through, and by doing so, it additionally secures package leaking and monitoring. It also secures the software from MiTM (Man-In-The-Middle) attacks from which the DH-2048 encryption may be vulnerable. Bottom line it is a very important security feature.

The program files of the software are a total size of approximately 97,2 MB. The installation took some time, and this software was not of the lightest regarding RAM in case you are using an old and underpowered PC. For a powerful device, it makes no difference in performance:

After we had opened the program, we liked that its design was very light and easy to use. The software presented several different choices when it came to servers. The best option for them was the automatic discovery setting, which finds the fastest VPN server:

Besides that, it provides detailed statistics regarding the network utilization history. It includes different timeframes varying from the past 24 hours to the last 60 minutes and it displays a graph in MB/s: 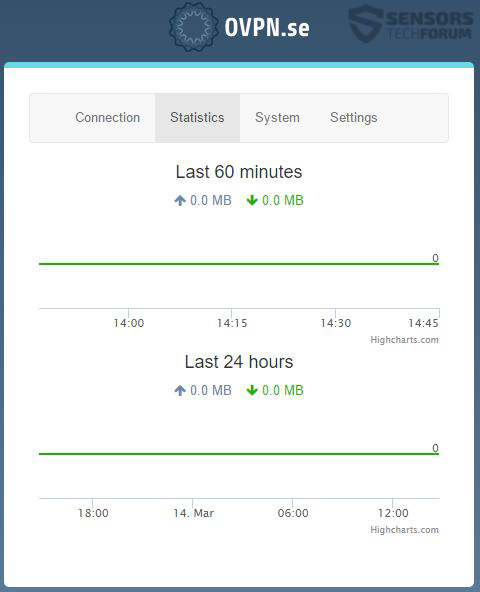 Besides this, the software also has other preferences which could be tampered with: 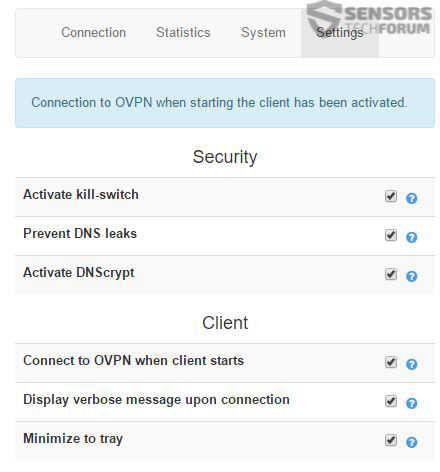 Not only this but in addition to the full version of the program, the user can add additional services and even the new “oVPN Box” hardware which is a solution not only for one device but home or small office networks as well.

These are the services you can add to the software to maximize security:

We enjoyed a lot of features of oVPN which we think are big advantages over the competition:

The software is good, but the company should always strive towards improvement, and we have noticed several areas that should be the center of focus for that:

This is one of the most effective VPN programs we have encountered so far. When we did an online search to see how other software researching websites have reviewed and compared other programs, oVPN was one of the best. With its service, the program is perfectly capable of providing a sustainable and secure VPN service while not affecting your internet speed.