This article has been created to review and demonstrate how the Keep Solid VPN Unlimited works and show it’s benefits as well as downsides.

With so many rules being passed by congress and so many new legislation of monitoring by governments, VPN has started to become something that we use on a very regular basis in order to conceal our online identities as it is our right to do so. In addition to this, VPN technology does not only mask the actual IP address and traffic coming and going from the computer of the user to stop hackers and “prying eyes” from monitoring you, but the Virtual Private tunneling technology also serves as a proxy, enabling you to safely visit a site, which you cannot visit from your country. And while proxies used to do this in a much slower way, VPN services tend to do this with minimal delays. In this review we will show one such service, called VPN Unlimited by Keep Solid, which can deliver what you demand at minimal cost and minimal loss of connection. But will the relatively new VPN Unlimited software be able to compete with one of the best players in this segment, we are yet to see in this review!

This is the main part of our review in which we will talk about how it feels to use VPN Unlimited as a customer and how you can benefit from the program as a user and we will also discuss some of the program’s downsides.

When you first download and install this software on your device, you immediately notice that it does not aim to be annoying and to constantly take up your screen with messages and so on. The situation with VPN Unlimited is rather the opposite as the program welcomes you with a rather pleasant “dimmed panel” style of tutorial, explaining the basic things you need to know about the program: 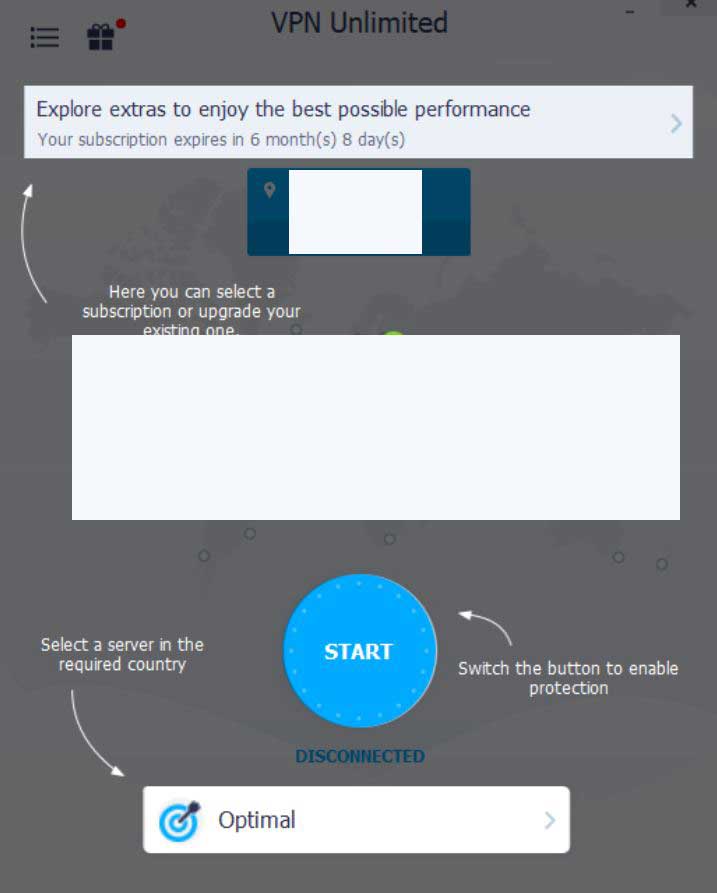 After you have learned what you need to, VPN Unlimited aims to get right down to business by showing your location in a rather pleasant way on the world map. And so far, nothing seems special, nothing seems out of the ordinary for a VPN program. But here is where you are wrong. As soon as you click where the tutorial says “Select a server in the required country”, you immediately start to understand how serious this otherwise little program actually is! It immediately takes you to an options panel, where you find hundreds of servers to choose from. And the program goes as far as to show you the health of each server: 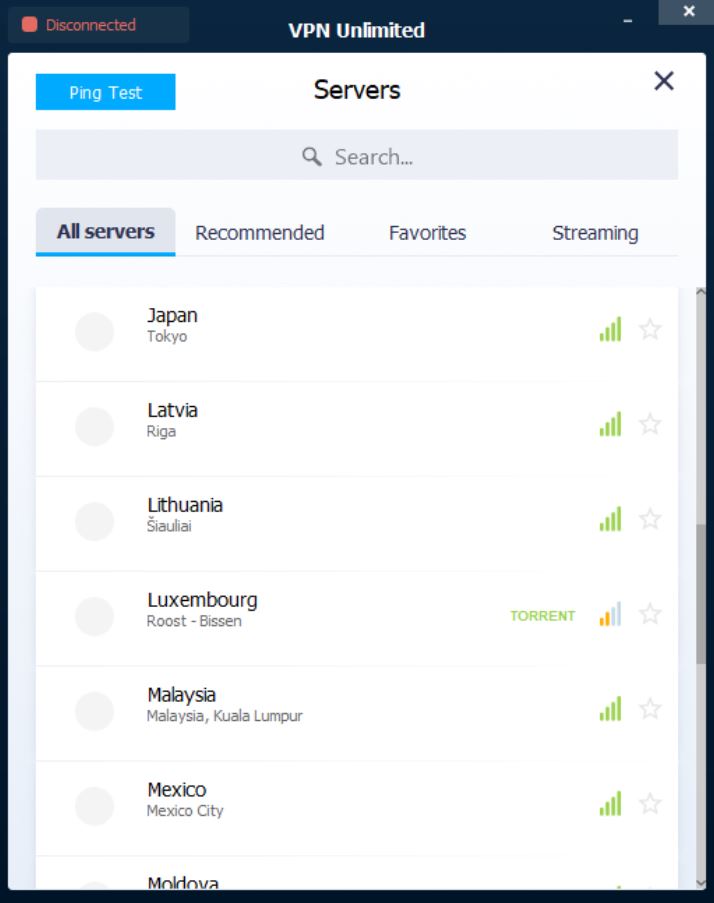 But the pleasantries do not seem to stop there, as it also has Reccommended servers for faster connection, Favorite servers, to memorize them for you, and also Streaming servers for maximum effectiveness. So when it comes to the servers, this program has it covered so far and at least at first glance you do not need to worry.

When we visit the settings of the software, we also find that everything seems to be in a well laid out and structured way, but also so simplistic that even a 5 year old is capable of tinkering with them: 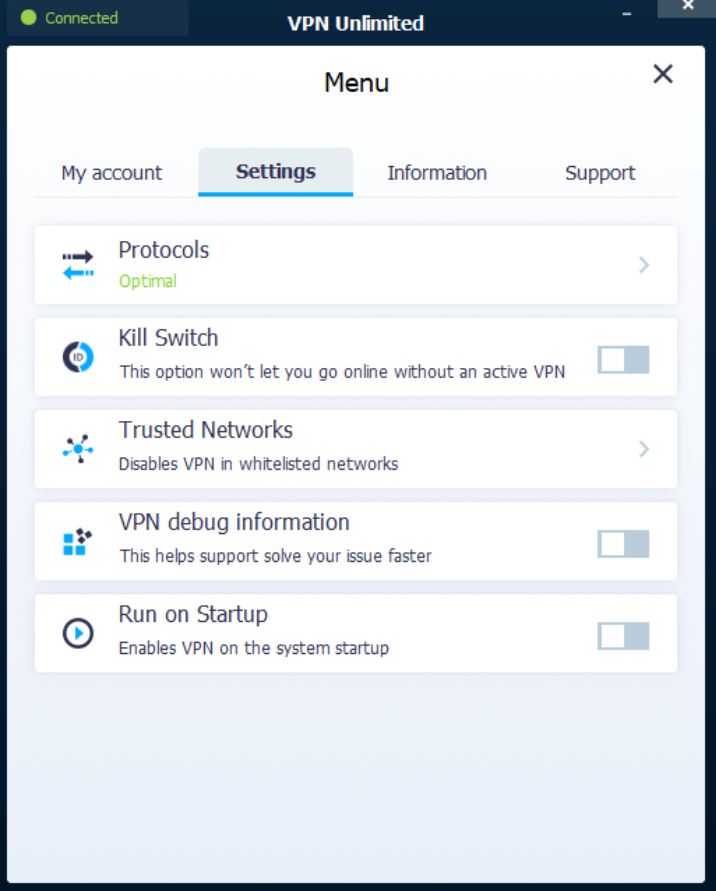 As you can see from the image above, there are neat options, such as automatic running on system boot to maximize security, debug data for geeks, and even a Kill Swich, which does not let you use the internet without VPN Unlimited being active. And as a bonus, the service offers Trusted Networks, which you can safely access, if they block VPN users. And the surprises continue when you click on the Protocols option. There, you are welcomed to familiarize yourself with all of the protocols the program uses while you are on the go, as they explain briefly which protocols offer what and as if they wanted to add an appropriate bonus, a switch, called “Stop DNS Leak” is also available there. It can stop DNS requests outside of your VPN’s DNS, which is a very efficient filtering option to prevent leakage. 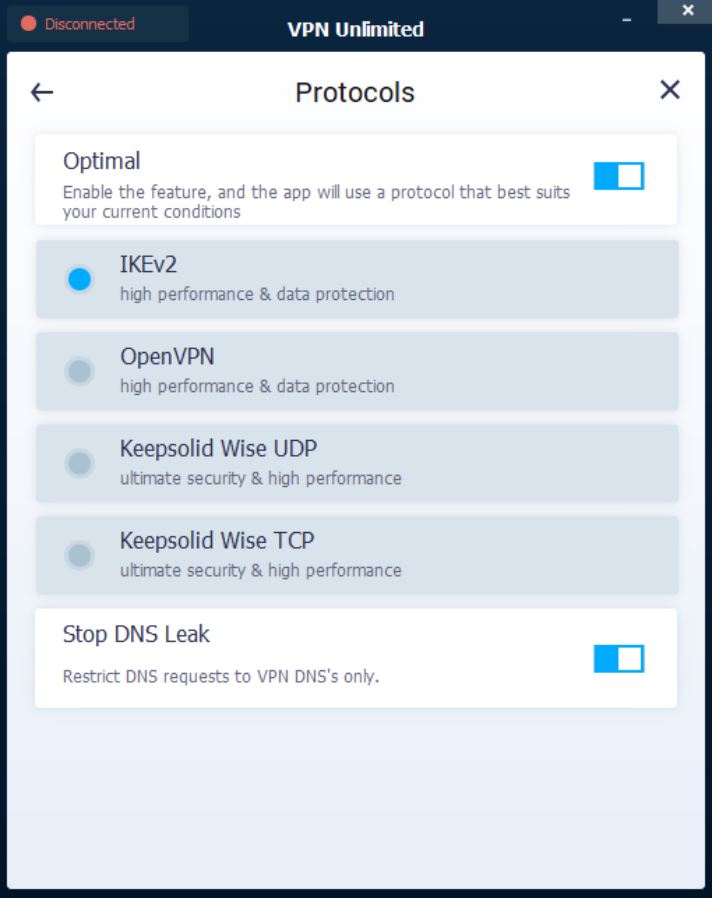 Judging by the performance of this service, it immediately becomes clear that they are all about the customer value as they have a quick customer support which contacted us in a matter of hours time after we submitted a request: 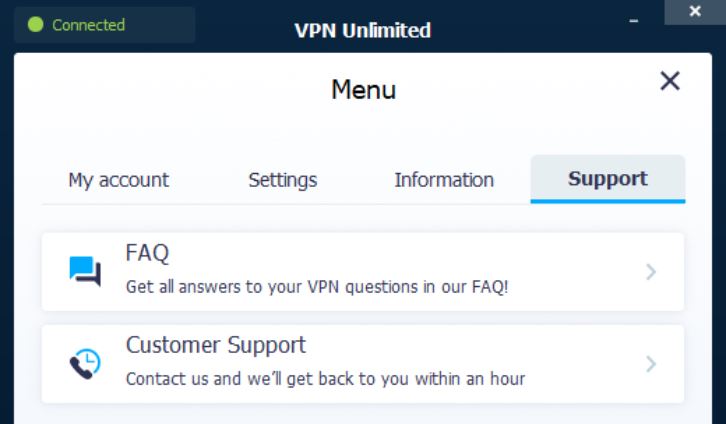 And to summarize, we will illustrate that the app looks very similar in appearance when you visit it from all of its compatible operating systems, which are not few at all:

Let us first start with the performance of VPN Unlimited. The program runs quite smooth when active with a stable RAM to operate and minimal resources from the CPU in overall. As a bottom line for performance, it took about 0.1 to 0.5 percent from the CPU and up to 80 MB of Ram which by today’s standards is next to none:

When we have tested the connection speed and quality, we have conducted several minimal experiments to see how it feels to use the connection for several days time without the VPN and with the VPN. This was done by connecting to a location near us at the moment of testing, which was Denmark: 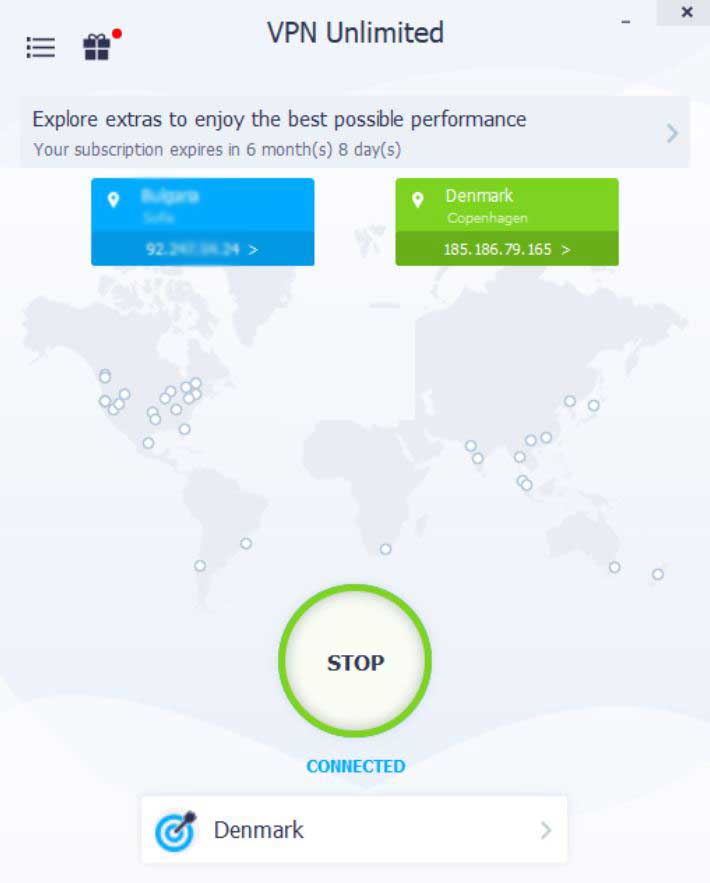 When you make a ping test to the same site, the difference does appear to be next to none: 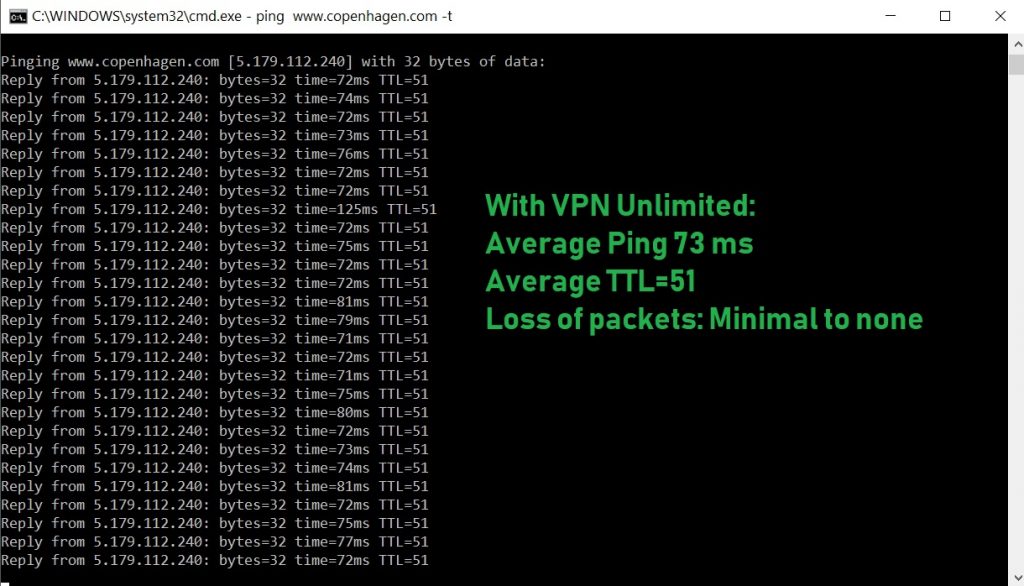 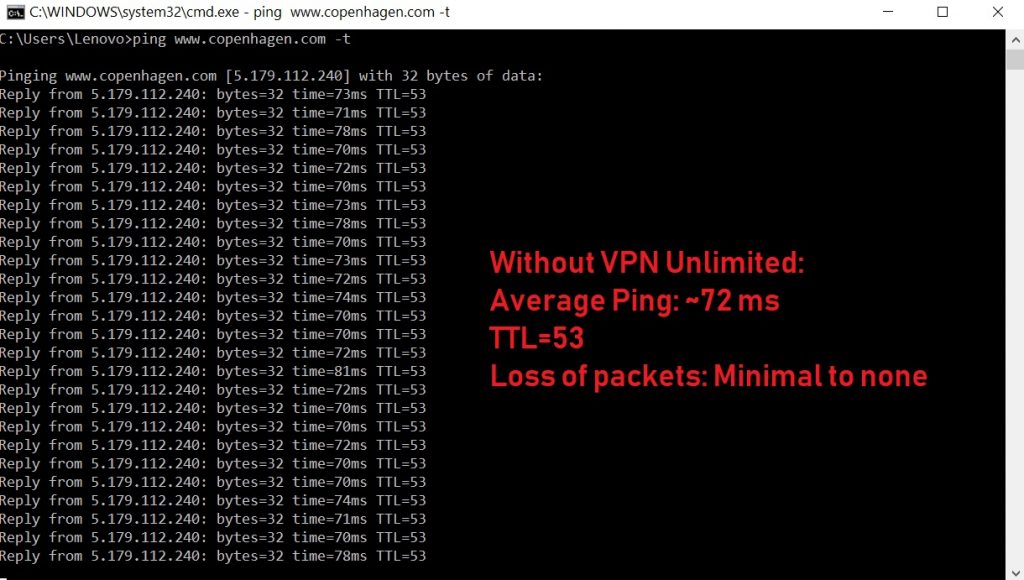 And when we use it, we were surprised to find out that the feeling is the same too. At no point when we were using a live website or playing a performance – intensive online game, like PUBG, we felt any lag or frame rate drop, which is rather satisfying for most users.

When we conducted speed tests form Ookla at speedtest.net, the results were also satisfying, even though they were not as much. Connection drop did take place, with the VPN Unlimited app enabled when we did a test on the same server, but it was only for the download speed of the software:

With VPN Unlimited ON

With VPN Unlimited OFF

And this slow down is for a good reason too, considering that the download connection traffic runs through a Keep Solid server, performing a strong encryption and masking your every activity. And when it comes to how it feels, at no point we noticed any delays as we would with something slower, like a Proxy, for example. So with a stable internet connection, you should not have any problems using VPN Unlimited for almost anything.

When we talk security, VPN Unlimited has it all and even more. While most VPN providers offer AES-256 bit encryption and secure protocols, such as IPSec, OpenVPN, IKEv2, SSTP, L2TP, PPTP, this service offers more to it than that. This is because VPN Unlimited has two algorithms which we found to be quite unique and not seen in many VPNs:

And this means that the VPN is also good for privacy too. The company combines this strong encryption and it’s “Keep no logging” policy and in their Privacy Policy, they claim that they won’t have interests to keep any financial or personally identifiable information, but may identify you via other means. And their no-logging policy is also very strict: