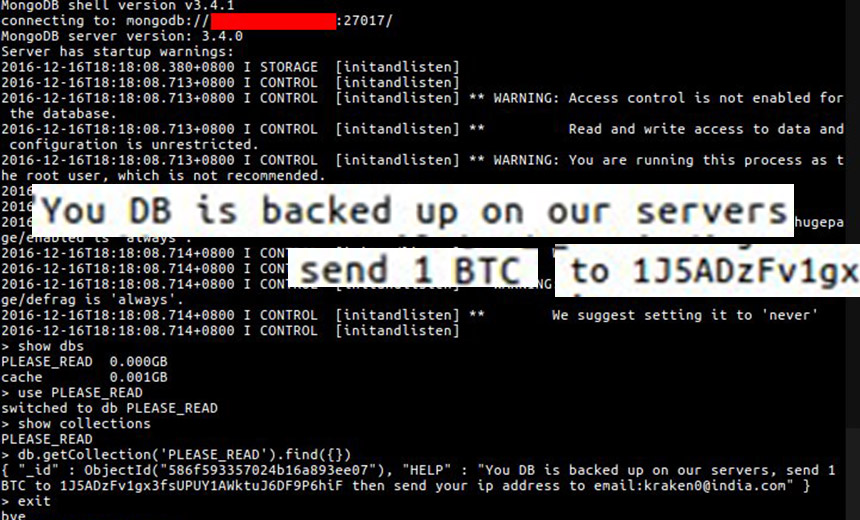 Misconfigured MongoDB databases are the latest targets hence victims of ransomware. Successful attacks against MongoDB have doubled within a single day, researchers say.

Servers running MongoDB were first targeted in December 2016, but the scale of the malicious attempts was small. The situation quickly escalated, as it appears. The reason? Many of the compromised databases hadn’t been set to require a password for access. This lack makes remote attacks easy to accomplish.

Security expert Niall Merrigan recently wrote that 12,000 MongoDB servers had been compromised. The number grew to 28,000 later the same day. The total amount of encrypted data could be as high as 93 terabytes!

Attacked organizations typically see a warning on their systems demanding a ransom payment of 1 Bitcoin.

Security researchers have created a spreadsheet named MongoDv ransacking where various details about the attacks are collected, such as victims, number of paid ransoms, email addresses deployed by the attackers. According to the spreadsheet, 20 victims have paid the demanded ransom but have not received their data, which is not that surprising after all. Rule number one for any ransomware infection is not paying the ransom as collected money only fuels malicious encrypting attacks.

It’s very likely that the success of these attacks is due to MongoDB servers left Internet-accessible. The compromised servers are also misconfigured or prone to vulnerability exploits (due to unpatched flaws). These factors have made it pretty easy for attackers to accomplish their purposes. Also, content may have been stolen or modified, researchers warn.

Poorly administered MongoDB servers have been the reason for several big data breaches, such as:

Back in 2015 it became publicly known that there were large numbers of Internet-facing MongoDB servers. The servers in question were also running outdated, unpatched software – a scenario for a disaster.

What Does MongoDB Inc. Say?

In a recent blog post, titled How to Avoid a Malicious Attack That Ransoms Your Data, Andreas Nilsson, MongoDB’s director of product security said that all these attacks could have been prevented had the security protections built into MongoDB been configured properly. More particularly, the ransomware attacks could have been prevented if MongoDB’s access controls were enabled and correctly configured. He concludes that:

You need to use these features correctly, and our security documentation will help you do so.

Furthermore, the company offers two additional options – MongoDB Cloud Manager and MongoDB Ops Manager. They allow admins to “enable alerts to detect if their deployment is internet exposed,” and also to create regular backups, the number one prevention rule against any ransomware.